* Link to audio files * The SDR Recordings on Google Drive include a sample of the onese recorded in Lamas and Sauce.
* NDB Logs - Non-directional beacon logs compiled by Andy Robbins from the SDR files.

Long-time shortwave DXers know Tarapoto as the location as some of the better heard Peruvian stations of the 1970s, 80s, and 90s such as Radio Tropical, Radio Imagen, and Radiodiffusion San Martín. That may seem like a long time ago, but when I visited the region in 2017 my purpose was following the paths of 19th century travelers while researching my book on the region. Nevertheless, I did visit all three radio stations and do some DXing from three different locations. I didn't plan to do that much DXing. But when plans fall apart you make the best of it. And that's what I did.

My first stop in the region was the old town of Lamas, about 20 kilometers northwest of Tarapoto, where I stayed at the Mishky Wasi. The hotel was in the rural western outskirts of town (-6.417091, -76.531091) and I planned to stay there two nights, getting to know the town during the day and DXing at night. Fate had something else in store for me. When I got back to my room late in the afternoon on my first I looked in the mirror and discovered that the reason my left eye had been itchy all day wasn't sunburn but rather a rapidly advancing case of conjunctivitis (pink eye). I did an Internet search and found that there was an excellent eye clinic in Tarapoto so decided to checkout of the hotel and go to Tarapoto first thing in the morning. But I wanted to make the most of my one night there, so I put up a quick delta loop for my Wellbrook ALA-100LN and got one night of overnight MW recordings. Reception was good, so it's unfortunate I didn't get to spend too much time there.

My priority in Tarapoto was taking care of my eye so on arriving I just got a room at a small hotel downtown and then took a taxi to the clinic. I had one of the worst cases of conjunctivitis that the clinic had seen. I was given medicated creams and drops and strong instructions to spend most of the daylight hours indoors for at least ten days. After two nights I decided to see if I could find a place to stay where DXing might be possible and came across the Mitu Wasi. The hospedaje was a collection of single-room cottages in a walled-in wooded property about 1.5 kilometers sout of the main plaza (-6.500946, -76.364233). I didn't expect much in terms of DX, but luck was with me. They gave me the cottage in the back where there was plenty of space for my wire loops and the location turned out to be surprisingly quiet. While there I made overnight recordings using three different loop configurations. The only problem was having to disconnect during the heavy thunderstorms that rolled through each evening.

My main reason for the trip was not DX, but rather research for my book Following Ghosts in Northern Peru. The plan was to spend two nights in Lamas, two in Tarapoto, and then a few in Yurimaguas before turning around and heading back west. Remember how I mentioned that fate sometimes has other plans? Rice is the most important agricultural product of the Tarapoto region and the same day that I moved to the Mitu Wasi the rice growers association launched a major protest against some government policies they didn't like. If you want to know the whole story, buy my book. But the short version is this: the angry arroceros had blocked the bridges on the highway north to Yurimaguas, the one leading back west to Moyobamba, and the one going south to Juanjui. Except for air traffic, the Tarapoto region was cut off from the rest of Peru.

Tarapoto may be the major town in the region, but there isn't much to do there. And even less when you are recovering from conjunctivitis. After a week I was getting stir-crazy, which I mentioned to Arnaud, the French owner of the wonderful Zygo Cafe where I had breakfast every morning. He suggested a visit to a rural lodge run by some friends of his. As my eye was healing nicely I didn't feel a need to stay close to medical care, so I figured why not. The next morning I left most of my stuff in my suitcase in care of the owner of the Mitu Wasi and left with just a few necessities and all my DX gear in my knapsack.

Sauce is a little town located on the north end of a lake of the same name in the middle of the jungle, about 25 air kilometers southeast of Tarapoto. It's a very pretty area and has slowly been developing into a eco-tourism site. Arnaud's friends ran the small La Posada de Sauce along the lake about a kilometer south of town (-6.701559, -76.225390). I had no doubts that the Posada would be a quiet place to DX from because the neighborhood hadn't yet been connected to the electrical grid. Instead, the Posada was powered by solar panels and backup batteries. They made it very clear that how long their power lasted would depend on how sunny day was. Noise wouldn't be a problem, but keeping my laptop's worn-out battery charged up would be a concern. I wouldn't be doing any timed overnight recordings.

My two nights of DXing at the Posada turned out to be everything I had hoped for. In the early evening I would alternately DX on battery power or recharge the laptop. Then I got up each morning to do the same until breakfast. And, reception was some of the quietest I've ever experienced. The late Henrik Klemetz listened to some of my SDR files and agreed.


My delta loop in Lamas. 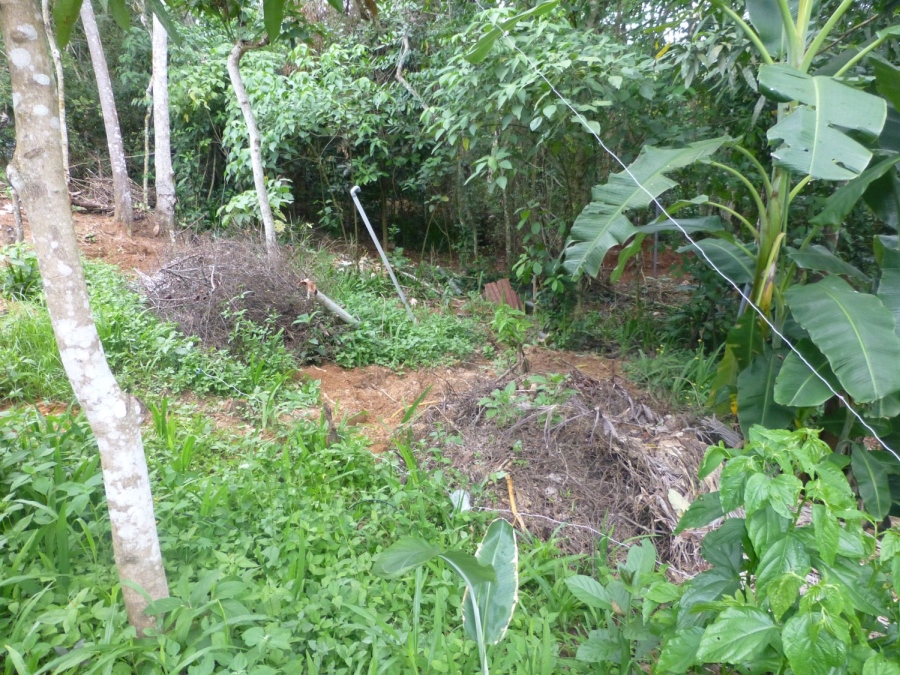 My cottage at the Mitu Wasi in Tarapoto. 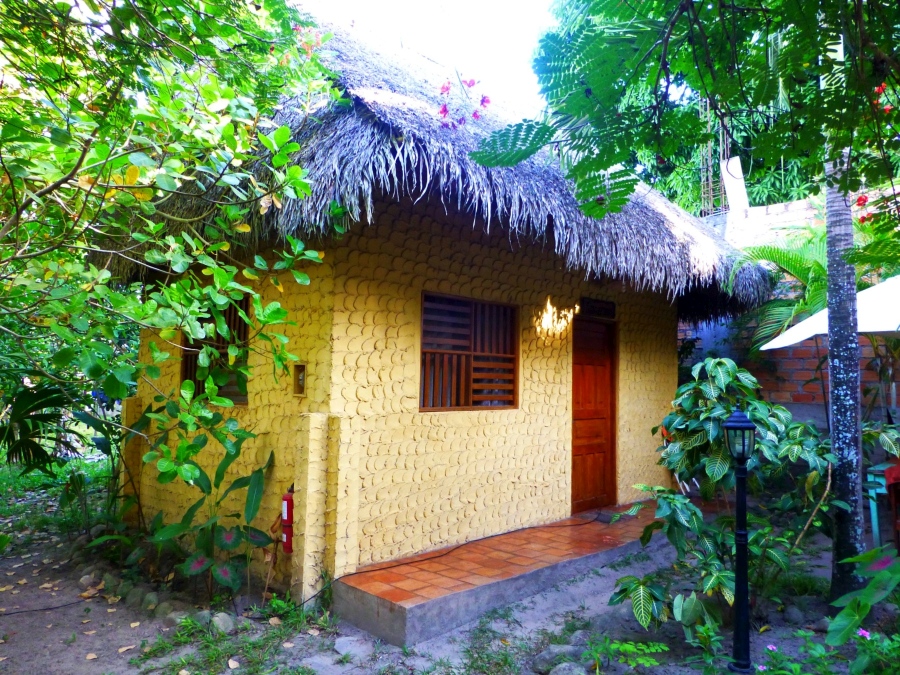 This square loop was one of three different antenna configurations I used at the Mitu Wasi. 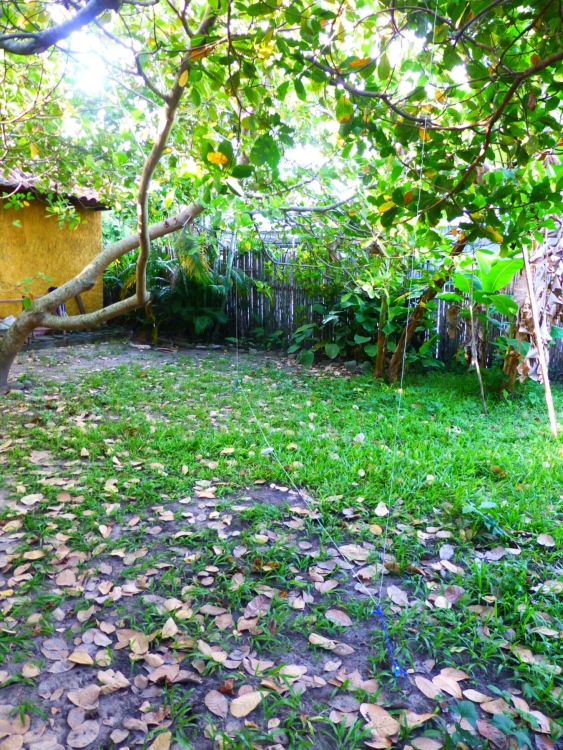 Getting to Sauce required taking a ferry across the Huallaga River. 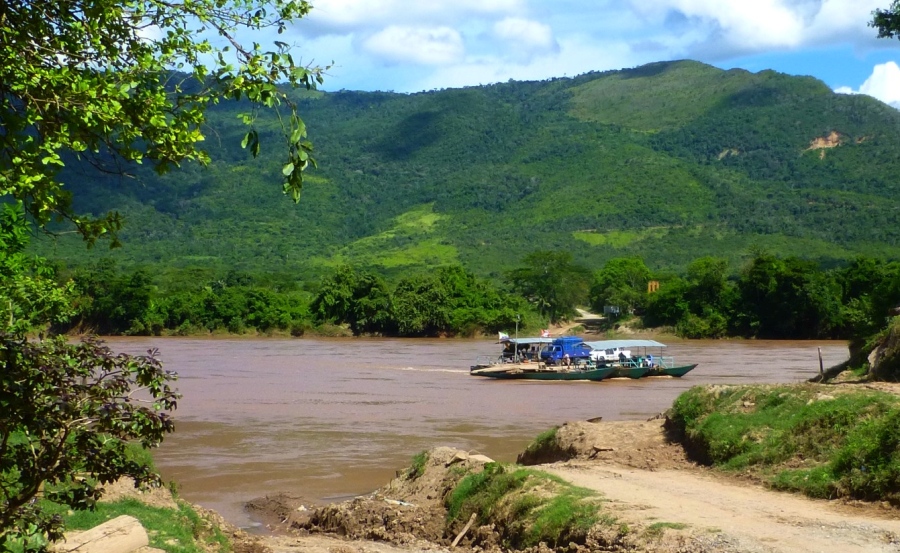 I had the first floor room. 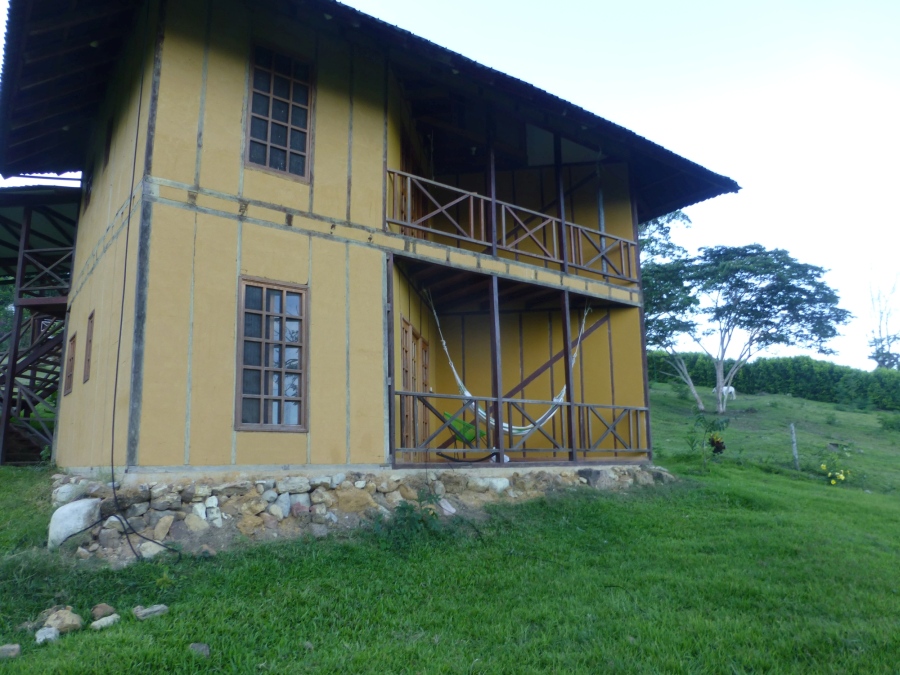 This tree was perfectly situated for my delta loop. 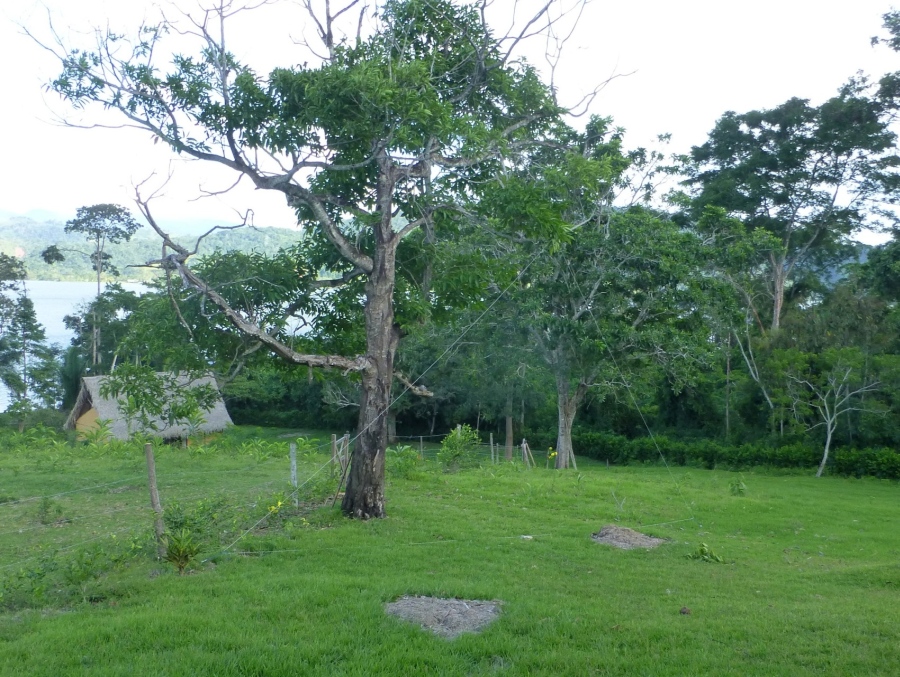 On the second night I simply turned the loop ninety degrees. 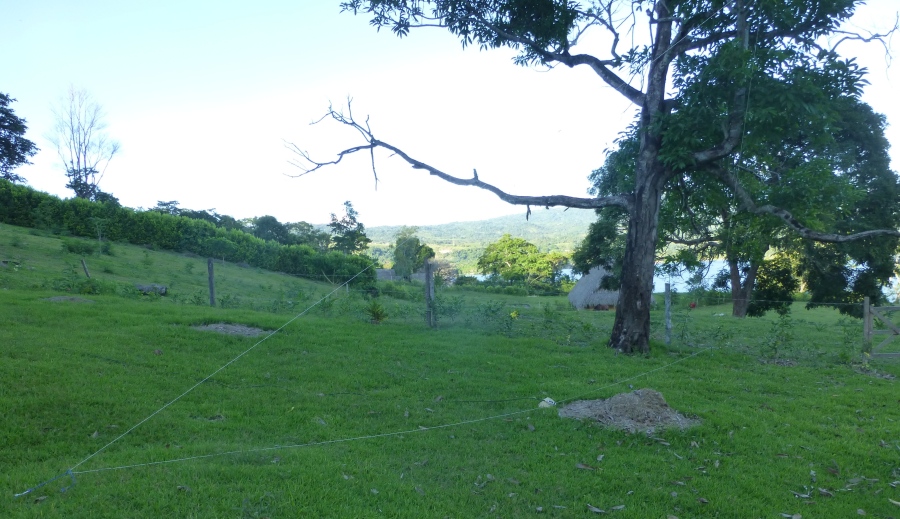 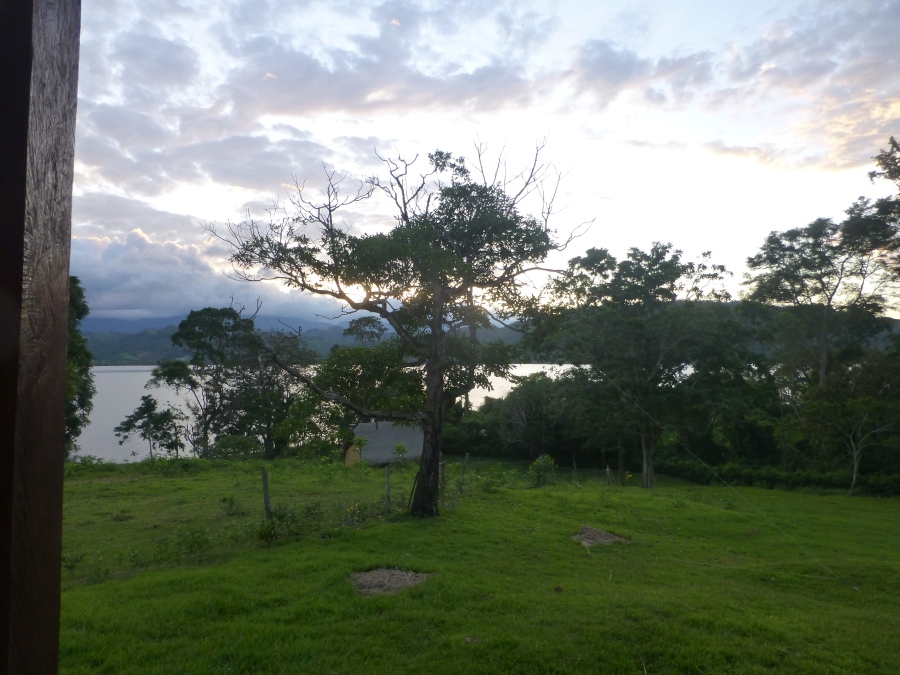 Another view of the house with the lake in the background. 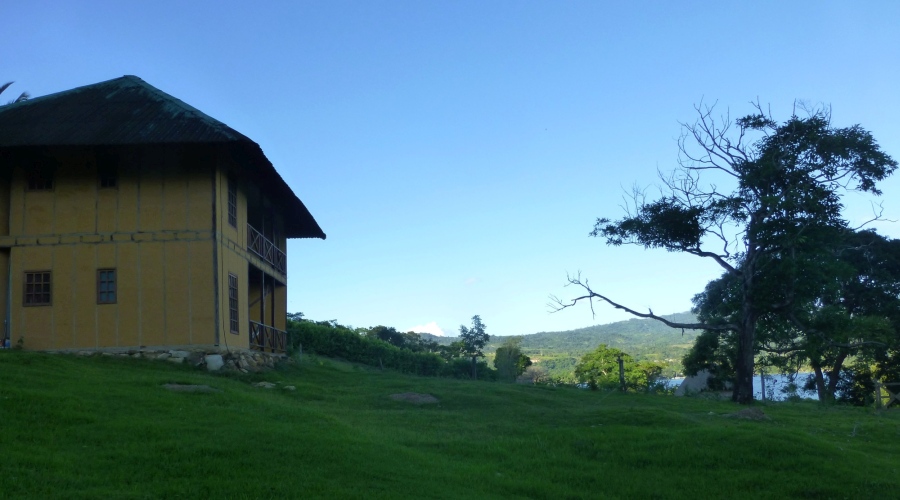 Making SDR recordings on battery power on the porch. 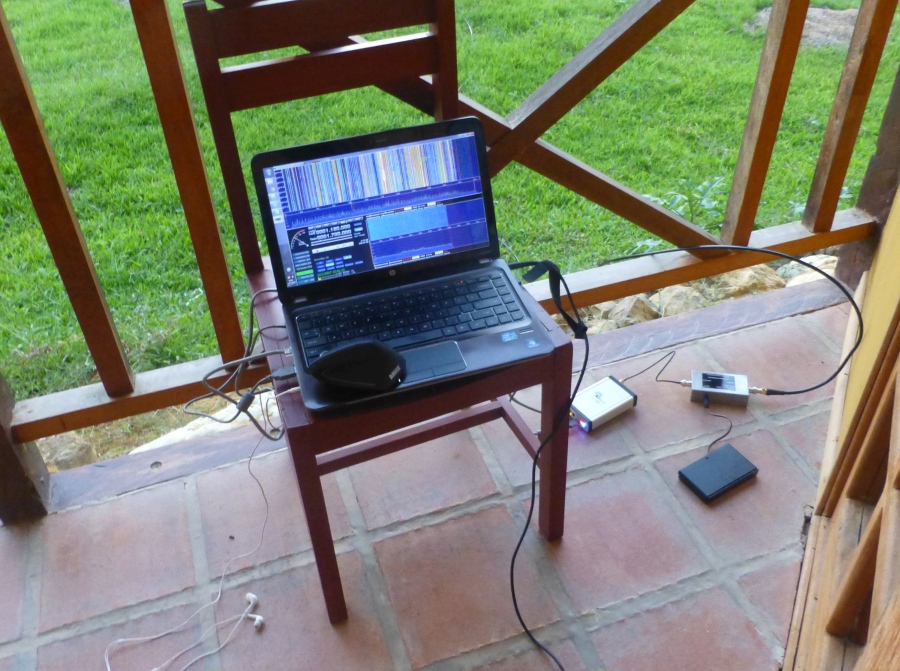