DXPedition In the Desert

* John Fisher's Neuquen Logs - Spreadsheet of John's logs from the DXpedition in the Desert.
* NDB Logs - Spreadsheet on Google Drive of non-directional beacon logs compiled by Andy Robbins and Brett Saylor from the SDR files.
* Neuquen SDR Recordings - A selection of SDR recordings made in Neuquen can be downloaded from my Google Drive. They will remain there until at least late 2021.

In mid-March 2019, my DX travel companions - John Fisher, Karl Forth, and Karl's wife Wannee - and I spent four days and nights visiting the sites and DXing in Bariloche, the Switzerland of South America. On the final morning we boarded a bus and thirty minutes later were in western Nebraska. Or maybe it was the Alberta prairie, as John thought. Bariloche is at the heart of a region of mountains, lakes, and thick forests but just to the east that fairyland quickly gives way to the parched semi-desert of Patagonia. It truly does feel like going from Switzerland to western Nebraska in half-an-hour.

The road made its way northeast for four hundred kilometers, never far from the Limay River. The river's banks occasionally added a little greenery to what was mostly an endless expanse of of brown land covered with low-lying brown grasses and shrubs. The few little towns we pass through were as dry and dusty of the countryside. (The highway on Google Street View.) Six hours later we emerged from the desert into a vast region of irrigated fields and orchards where the Limay joins the larger Neuquén river for its journey to the Atlantic. The Neuquén region is one of Argentina's most important fruit-growing regions. If you buy apples or pears with "Argentina" labels on them in North America and Europe, they probably came from these fertile orchards. And the surrounding desert isn't as unproductive as it looks: it's one of Argentina's most important oil and gas producing regions. John, who worked for years in the oil industry in Canada, spotted numerous familiar names on office buildings as we rode into the city of Neuquén. Oh yes, one more thing. The region is a great place for DXing.


We rented a little cottage for two nights and I erected a ten-meter loop to make overnight top-of-the-hour recordings of the MW band the first night. But that wasn't the real DX we had come for. 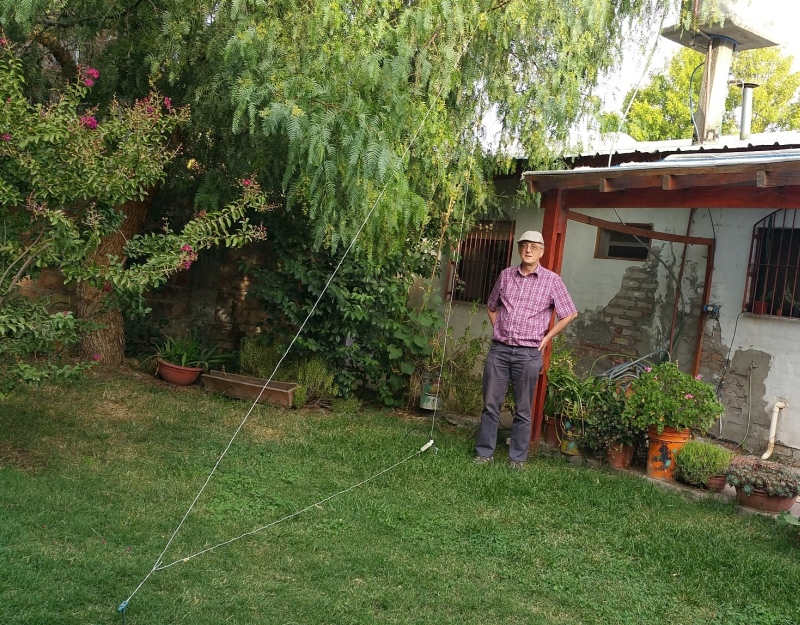 Several times a year local DXers José Kucher, Jorge Mesquín, and Mario Garnero go on DXPeditions into the desert where they lay out super-long BOG (beverage-on-the-ground) antennas and pick up medium wave DX from thousands of miles away. For several years they've had some of the best MW DX on the continent. José and Mario have also done DXPeditions to Easter Island. I had written José to say that we would be passing through Neuquén and he promised to set up a DXPediton for us. So a few hours after we arrived in the city, José, Jorge, and Mario showed up with a plate of Argentine meats and cheeses and several bottles of wine. We spent the rest of the evening getting to know one another and planning the next night's DX event in the desert. 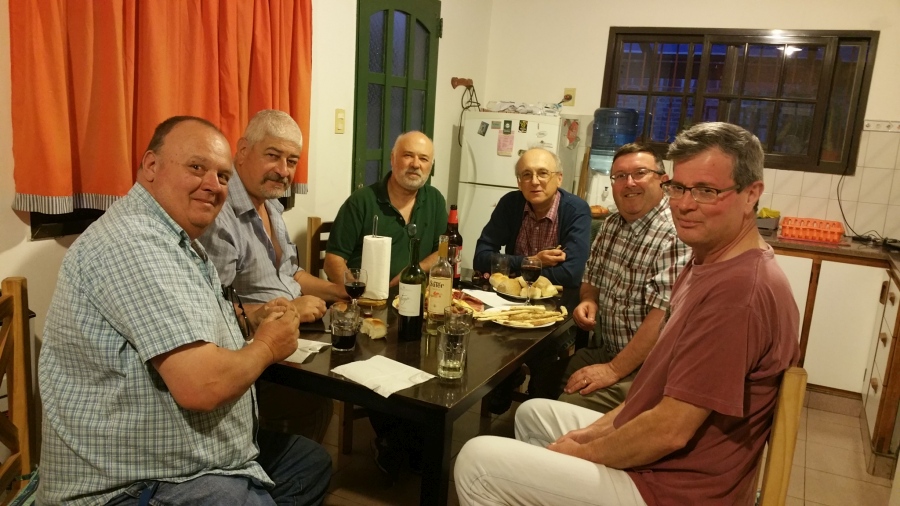 The next morning, José picked the four of us up for a tour of the Neuqén area. Here we are at one of the many beautiful parks along the Neuquén River.

While at the park we tried a little ultralight DXing. 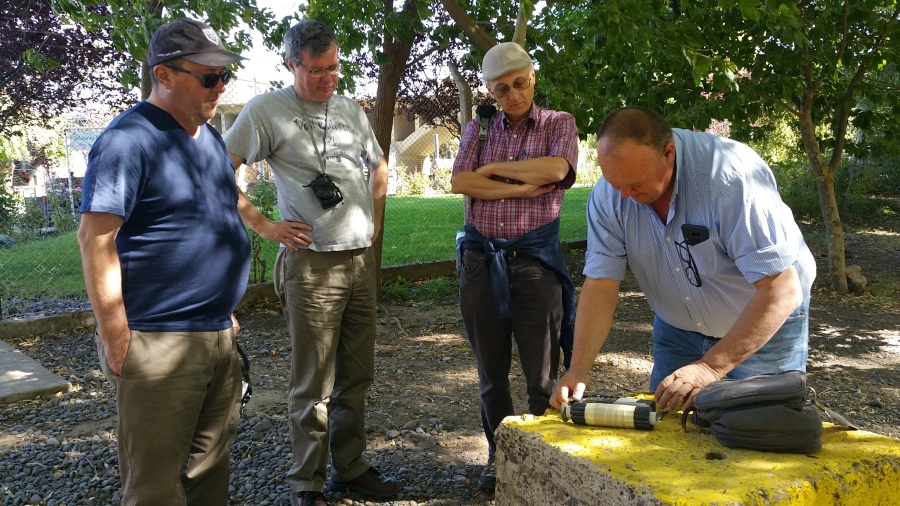 A few hours later we dropped Wannee off at the house and headed out to the desert to meet Jorge, Mario, and Jorge's son Emilio.

Our hosts had arranged for us to set up on the northeast edge of one of the largest chicken farms in Argentina. It had the advantage of being easy to reach but also far from any power lines. This satellite view shows the green irrigated river valleys surrounded by the brown desert. The farm, which is circled, measures roughly 3.5 kilometers east-to-west by 1.5 kilometers north-to-south. Our specific location was next to a storage building at coordinates (-38.881351, -67.913174). 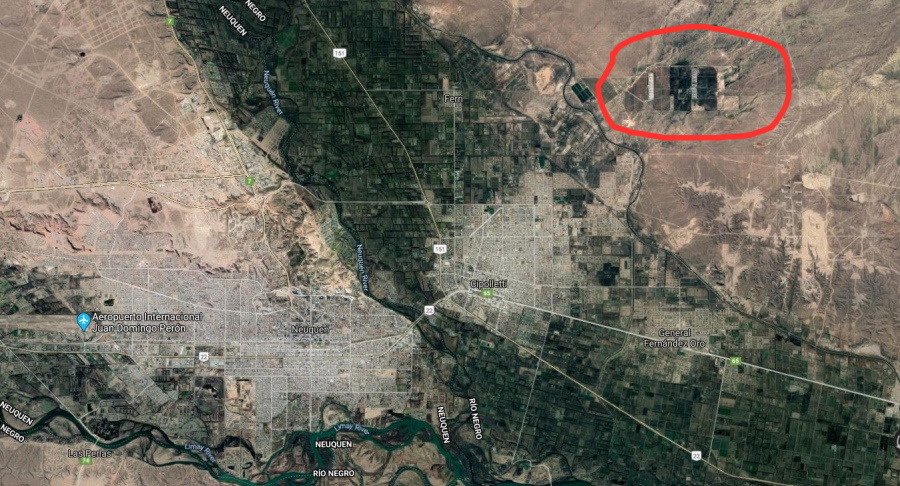 A DXPedition requires a good meal and Jorge was our chef. 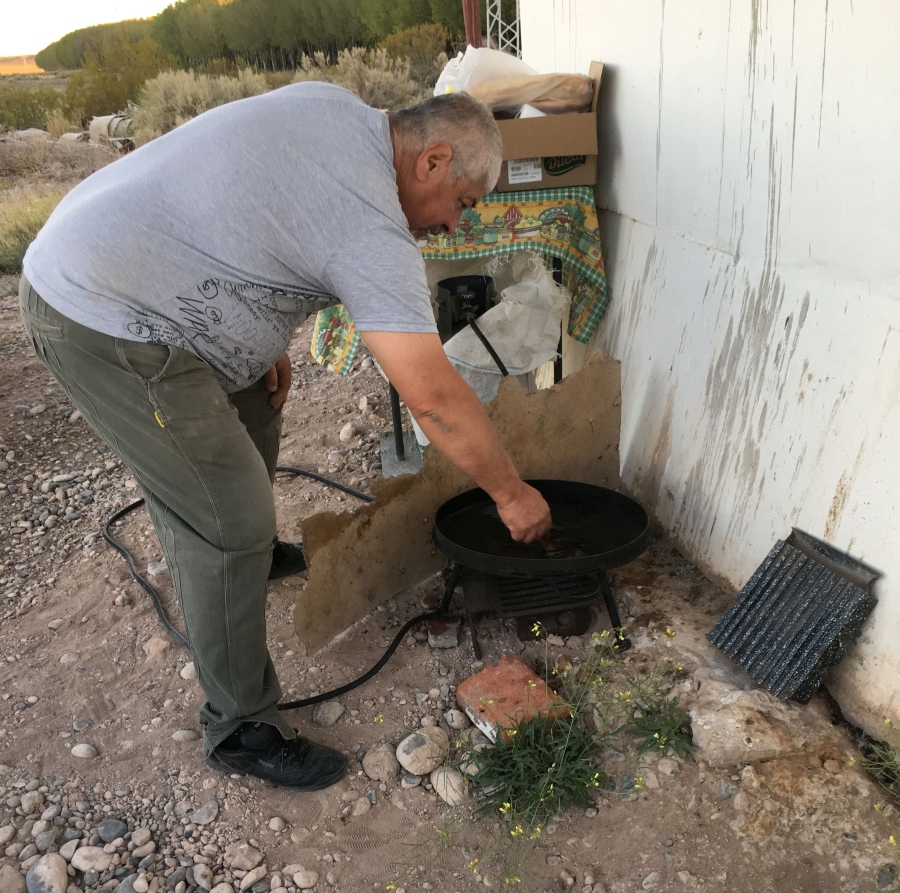 First the vegetables and seasoning. Excellent Argentine beef will be added later. 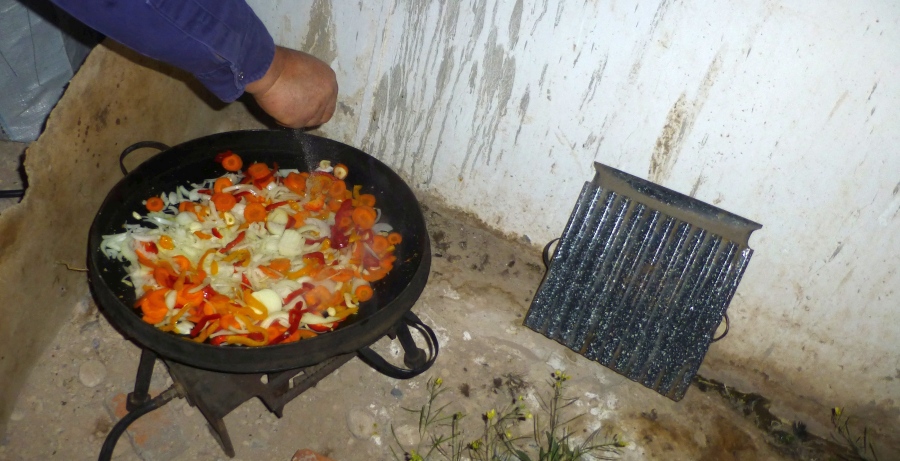 While Jorge was cooking the rest of us had work to do turning two spools of wire into 800 meter BOGs. 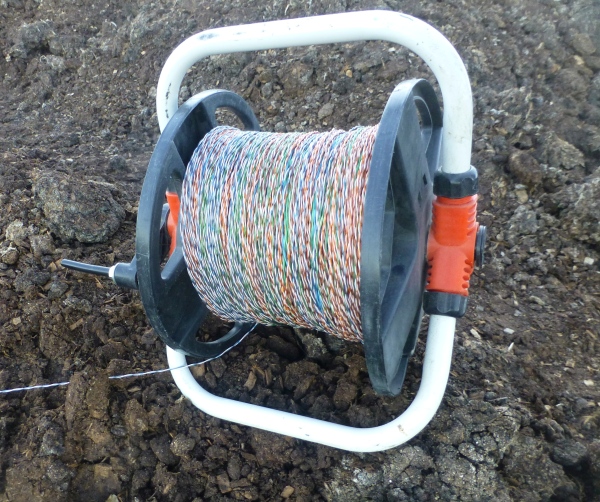 Our starting point was this cleared-off area where the farm composts chicken manure. (The dried-up manure didn't smell at all but we could occasionally smell the chicken barns a few hundred meters to the west.) 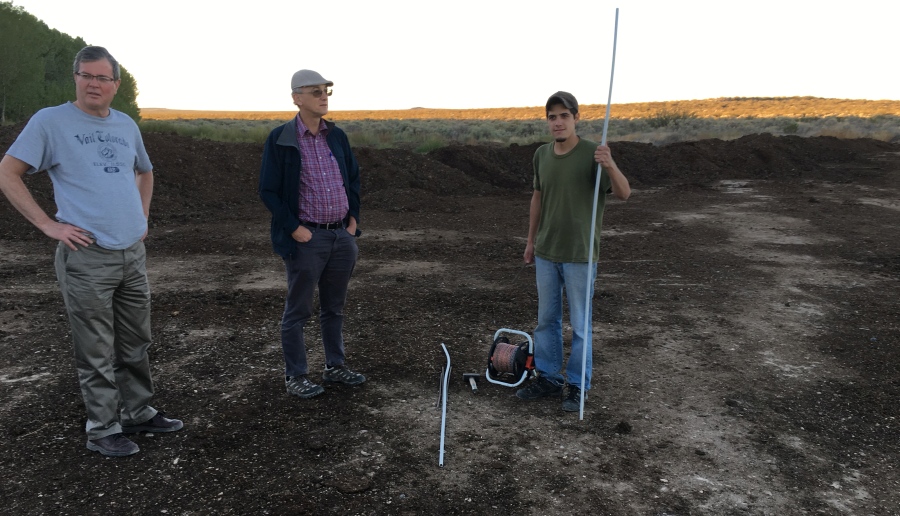 John and Karl accompanied Emilio as he ran out 200 meters of coax as a lead-in and then continued out into the desert with the northeast BOG. 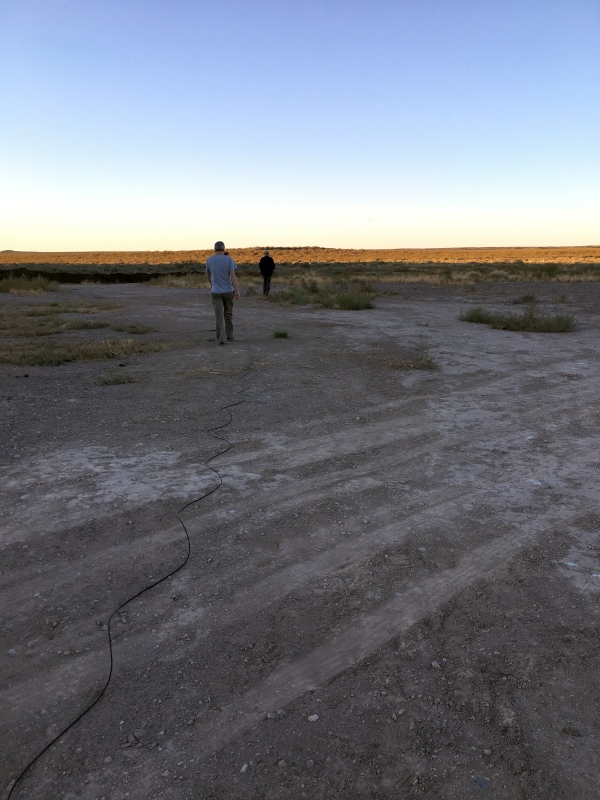 Meanwhile I followed José over mounds of composted chicken manure and into the desert as he laid out the north BOG. 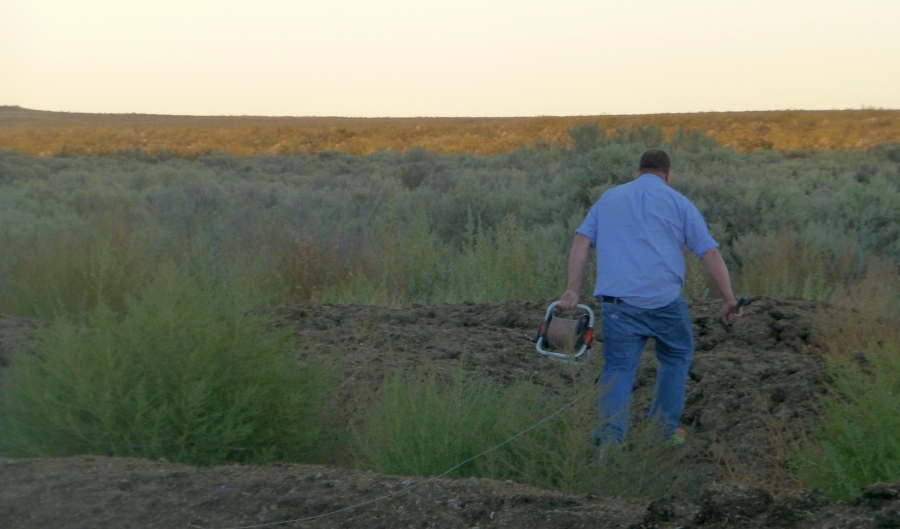 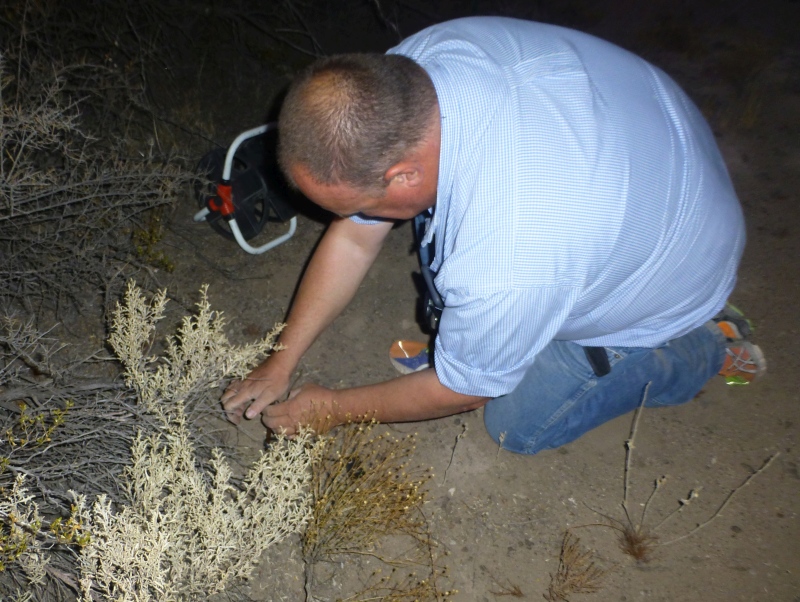 One BOG pointed northeast and the other a few degrees west of north. 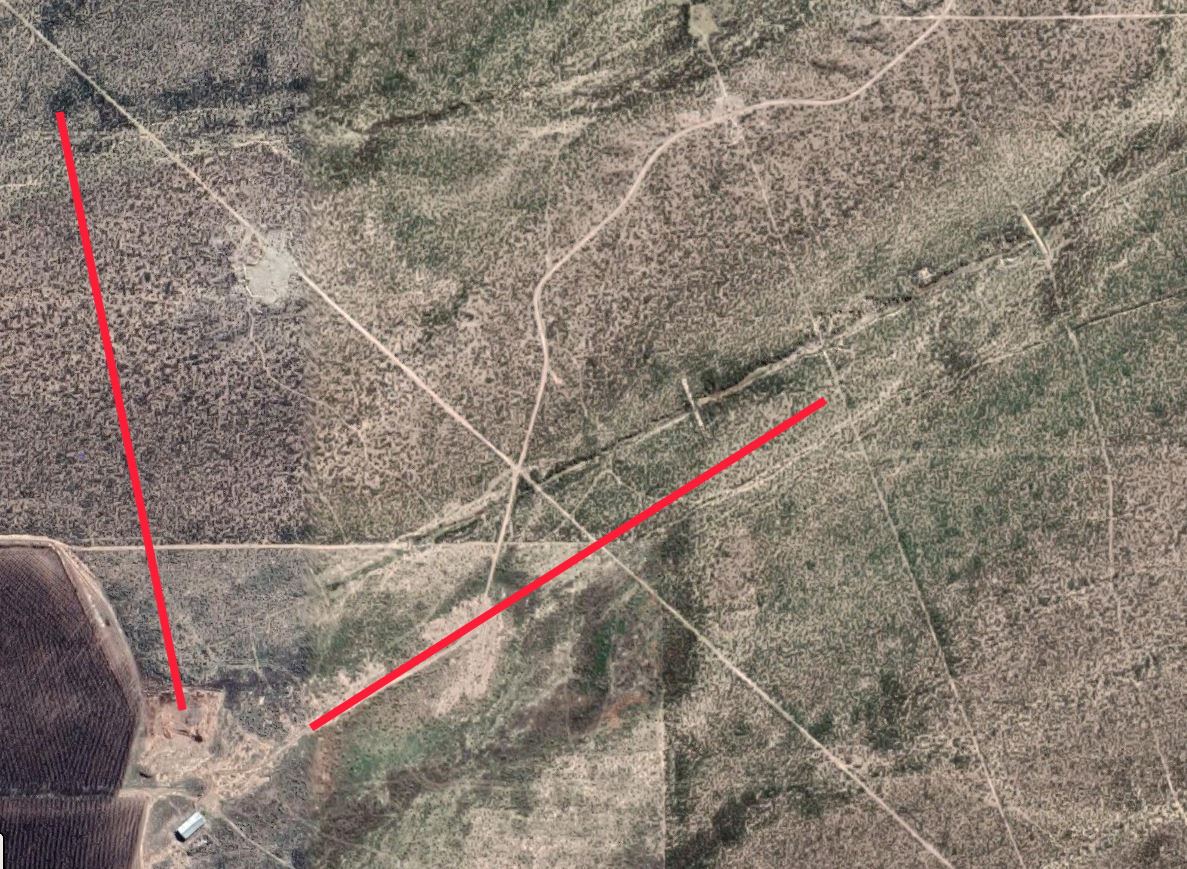 Dinner was waiting for us when the antennas were finshed. 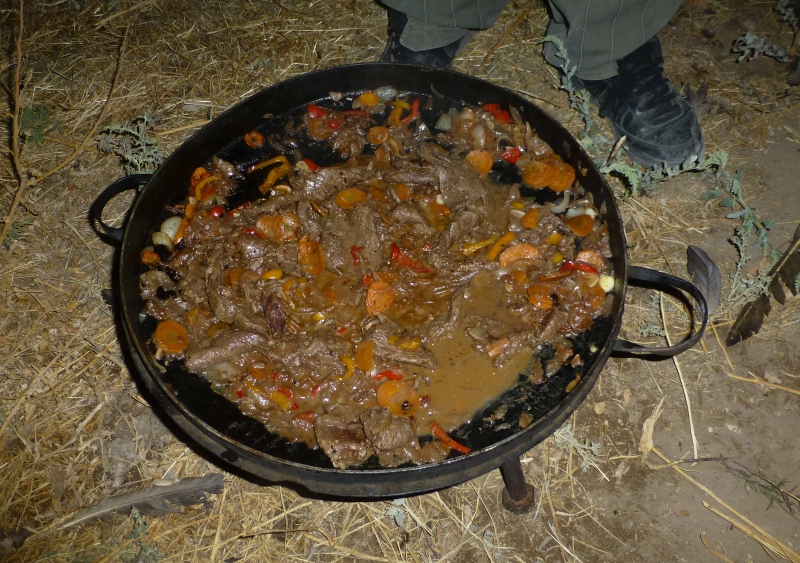 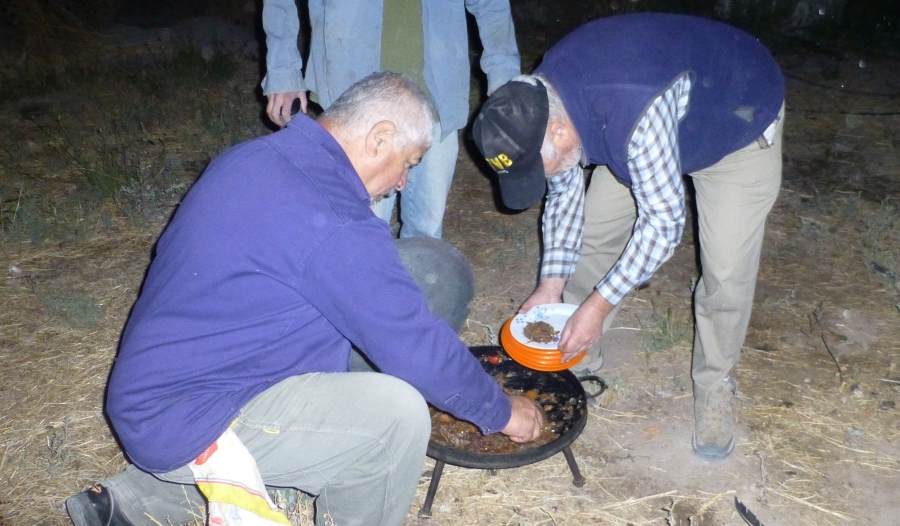 A feast in the desert. 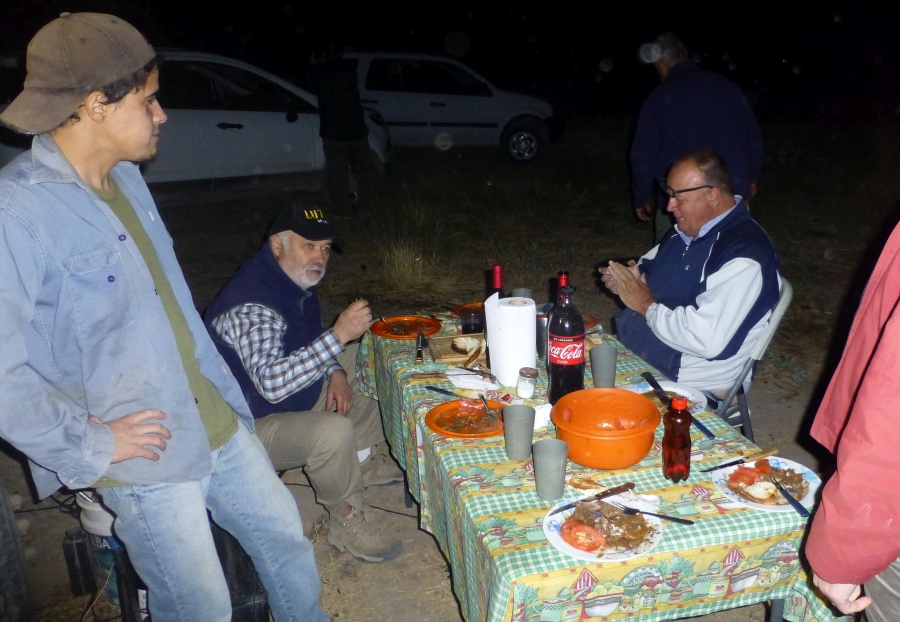 Throughout the evening we also emptied more than a few bottles of wine, including a couple bottles of Dadá, the offical wine of Argentine DXing. (Anyone who knows CW will appreciate the significance.) 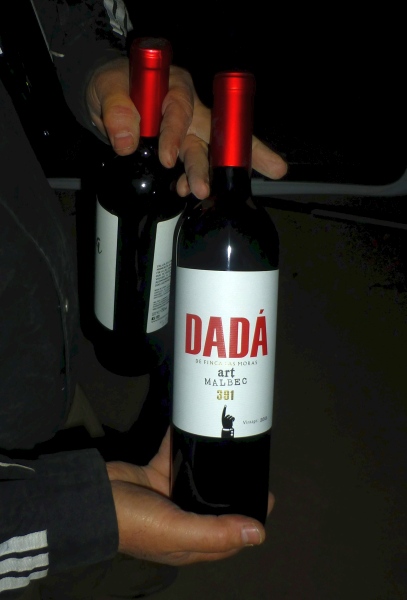 Mario had set up the tent that would serve as our DX shack. There was only enough room for four to DX comfortably, so John, Karl, and I joined José. For Jorge, Mario, and Emilio it was enjoyable enough to sip Dadá and star-gaze in the clear desert air. 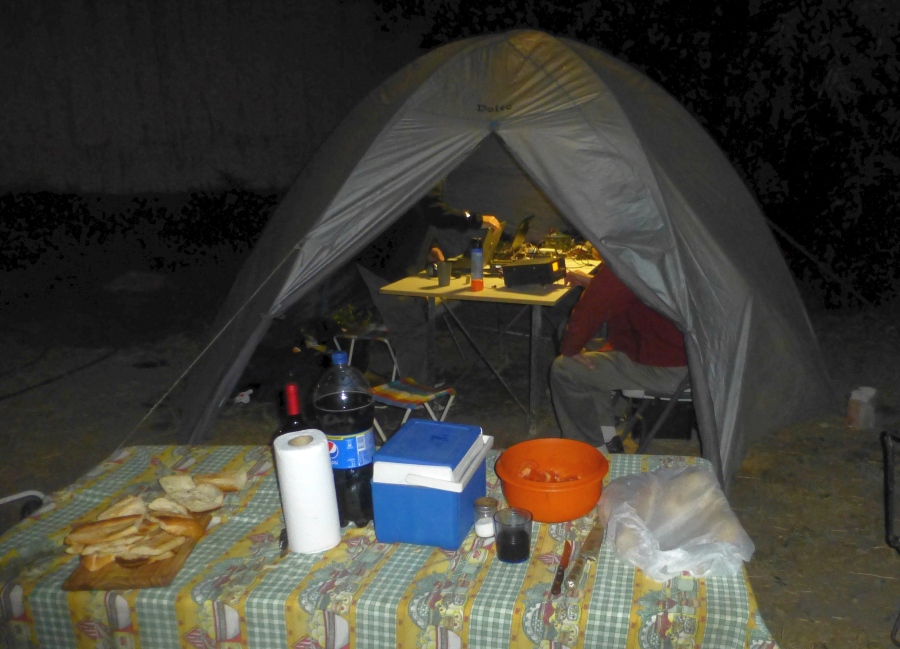 John, José, and I had our SDRs. José had also brought along an ICOM receiver for Karl to use when he wasn't using the ultralight. 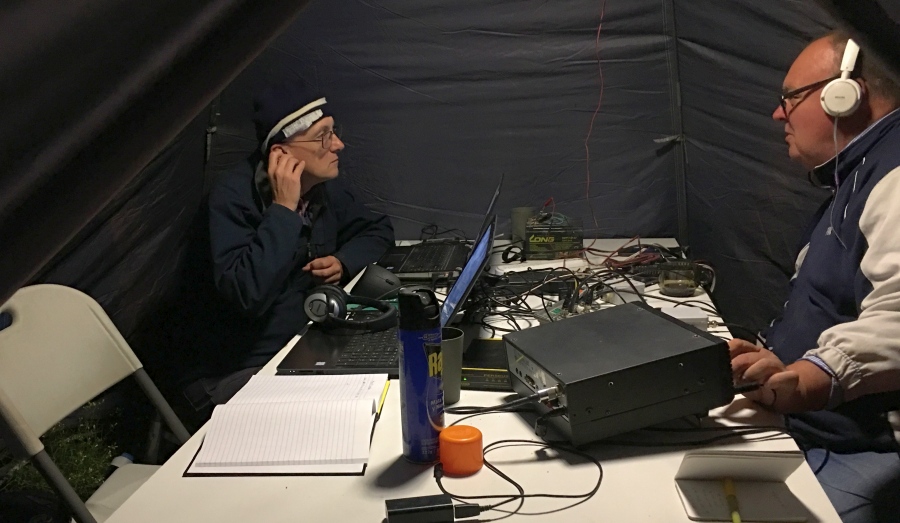 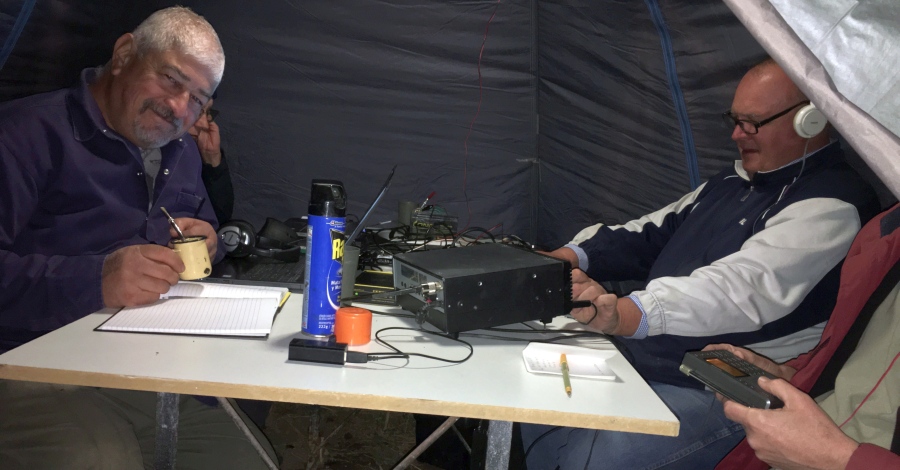 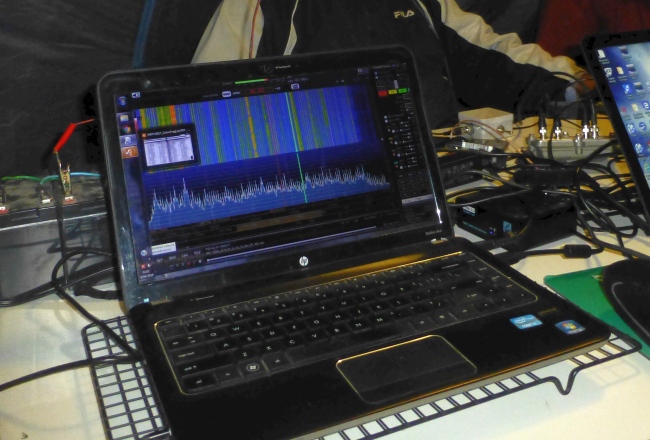 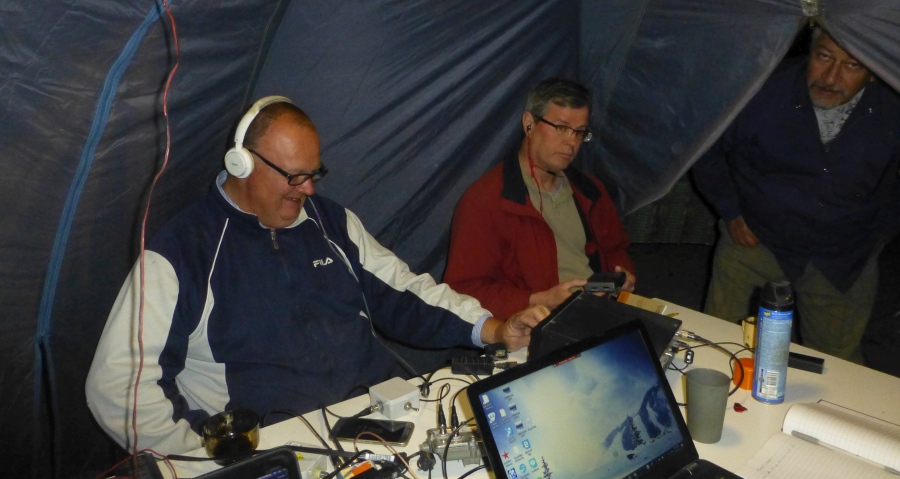 This DXPedition in the Desert was one of the most memorable DXing experiences I have had in nearly fifty years in this hobby. John, Karl, and I owe José, Jorge, Mario, and Emilio a tremendous thanks for all they did to make everything so special. The only drawback was our fault - we had a 10 a.m. flight to Buenos Aires the next morning so we couldn't stay to DX all night. Around 4 a.m. we packed up our gear and José drove us back to town so we could clean up and catch a few hours sleep. Our hosts would continue DXing until past dawn and do all the clean up.

Sometime in the next few years I plan to return to Argentina to see the places I missed, including the rest of Patagonia. I'll be sure to visit Neuquén again and share a few bottles of Dadá with my Argentine friends.