* Oberá Logs - Spreadsheet of Logs Made From the Oberá Recordings on Google Docs. (Updated as more DXing is done.)
* Oberá Audio Files- Around 100 MP3 recordings of medium wave stations made there.
* Oberá SDR Recordings - All of my Oberá SDR recordings can be downloaded from my Google Drive. They will remain there until at least late 2021.
* NDB Logs - Non-directional beacon logs compiled by Andy Robbins from the SDR files.


I spent the first five months of 2019 traveling in southernmost South America. At the beginning of January my daughter and I had traveled through the southern part of Brazil, from Uruguay to Pelotas and Porto Alegre and then on to the Iguazu Falls on the border of Argentina. But except for making a few top-of-hour SDR recordings at our AirBnB in Foz do Iguaçu, I didn't do any DXing on that part of the trip. I really wanted to get some SDR files full of good Brazilian MW DX, so later as I traveled around northern Argentina in May I made a small excursion into the western part of Brazil's Rio Grande do Sul state to visit the Jesuit ruins at São Miguel das Missões. I also expected to get some good DX at my AirBnb in the rural outskirts of the little town next to the ruins. There was a great place for my Wellbrook loop but when I plugged in the Elad FDM-2 the entire MW band was filled with a loud bzzzzz. I tried repositioning the antenna and tried recording in the middle of the night in hopes the noise would be gone, but no luck. And as I only had 20 meters of coax I couldn't move the antenna any further from the house. 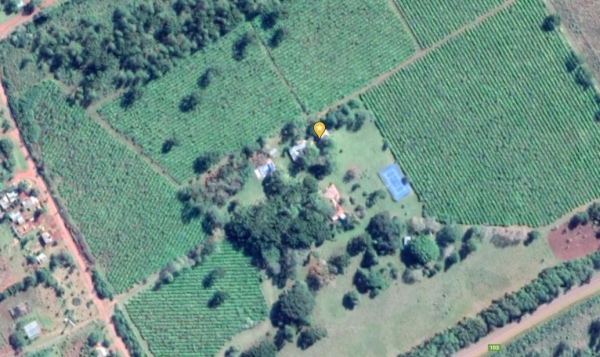 So what to do? I had some extra days in my plans so I decided to look for somewhere in the region that would just get me good DX for a couple of days. I began poring over AirBnb listings and Google Maps and that's how I came across Colonia Finlandesa, or Finnish Colony. Any place connected with Finland has to be good for DXing, right? The little village was marked on Google Maps about 20 kilometers west of the small city of Oberá, towards the south end of Argentina's Misiones province. Misiones is that narrow arm wedged between Brazil and Paraguay. Perhaps should call this the Colonia Finlandesa Log, but Oberá is so much shorter!

Argentina is a nation descended from immigrants and Misiones is one of the world's most diverse immigration melting pots. Beginning in the late 1800s, tens of thousands came from all over Europe, the Middle East, Japan, and neighboring Brazil and Paraguay. The different communities have both melded together and maintained pride in their distinct identities. And nowhere in the province (or, I believe all of Argentina) celebrates that diversiy more than Oberá. Every year the city hosts the Fiesta Nacional del Immigrante in a park filled with little museums representing the different immigrant groups. There is even a beauty pageant where young women descended from each of the different nationalities compete for the title of festival queen. After leaving Brazil I spent two nights and a day in Oberá and learned that it is a very special place. Wandering around the town I saw a mixture of faces and names - Polish, French, Italian, Arab, Japanese, Swedish, and more. I was looking forward to visiting a little village filled with the descendents of Finnish settlers. 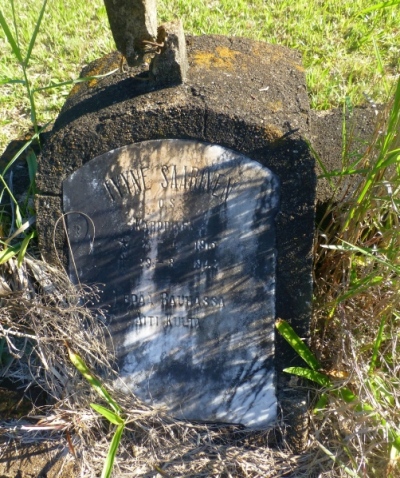 In the meantime I did a little Google research on my next destination, just up the highway. I learned that Colonia Finlandesa was founded in 1906 by 120 Finnish immigrants, the largest group of Finns to immigrate to Argentina. I knew that getting to the village would be easy. It's on one of the two main routes to Posadas, the provincial capital, so I could just get a bus heading that way and have them drop me off. So on my final morning in Oberá I went to the bus terminal and asked what buses went by Colonia Finlandesa. No one knew what I was talking about. So I brought the village up on the maps app on my phone and showed it to a bus driver. After studying it for a few seconds he said, "That's what we call Kilometro 20" and told me what bus line to take.

My rental was the upstairs of a small peripheral building that was on the edge of a group of buildings that centered on the main planation residence. The owners, however, spent most of their time in the city of Posadas (the capital of Misiones) and the only people there were a middle-aged housekeeper and a teenage boy who took care of the grounds. Probably the reason that the local people now call the village Kilometro 20 instead of Colonia Finlandesa is that aren't any Finns left. The original settlers' descendents made money and moved to larger towns such as Oberá or the provincial capital of Posadas. Today the only inhabitants are the impoverished descendents of the original Indians who inhabited Misiones before the outsiders showed up. Some crumbling tombstones in the cemetery are all that's left of the Finns. Or maybe not. Their descendents are probably who owned the plantation I was at and several others in the area. The one I was at raised yerba mate, tea, and pine trees. They had their own sawmill and furniture factory for turning the trees into very fine wooden tables and chairs. It was an impressive operation and must have been very profitable that the owners didn't even need to be there managing it all.

What I've learned about picking travel DX locations from AirBnb and Google Maps is that sometimes you're lucky and sometimes you're not. This time I was very lucky. Not only was the space for my Wellbrook loops everything it looked to be from the pictures, but reception was very quiet. As I put together this page I've only started to DX the SDR files, concentrating on the top end of the band. As I hoped, there's excellent reception from nearby southern Brazil so my Portuguese is getting some good practice. I've also found some interesting DX from Uruguay, Paraguay, and northern Argentina. While I've had some good catches of low-powered stations, so far I haven't had any long-distance catches. But I expect that will change when I DX the lower frequencies. Also, my friends Andy Robbins and Brett Saylor have found some interesting non-directional beacons on the longwave SDR files that I made.


I had the second floor of this peripheral building all to myself. The first floor was storage and utilities. 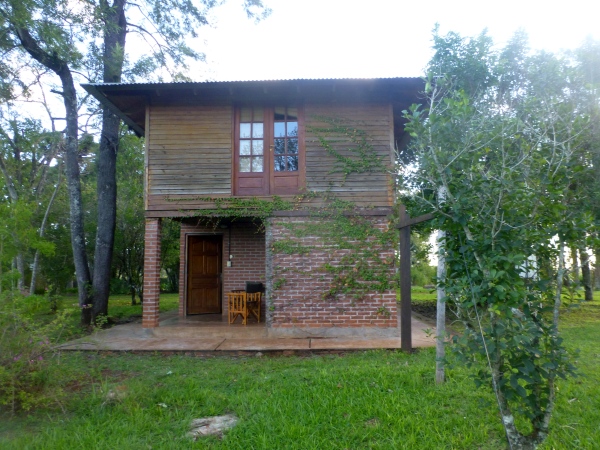 The first day's antenna was a long rectangle running from a pine tree then across the farm lane to a palm tree. It was oriented at about 60/240 degrees, roughly towards São Paulo in one direction and towards Santiago, Chile in the other. 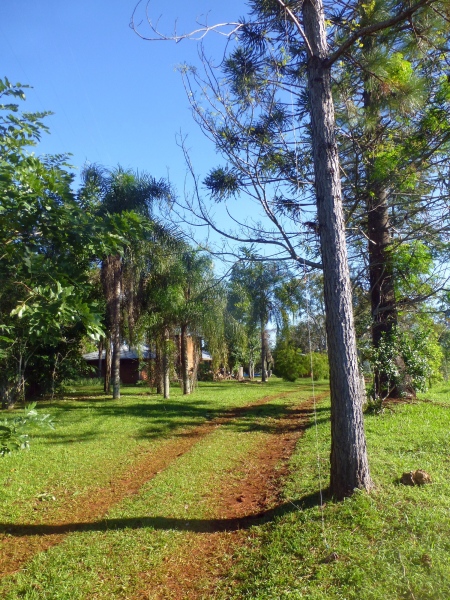 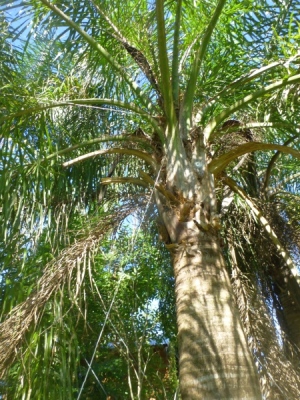 A couple of hours after I put up the antenna one of the workers drove that day's harvest of yerba mate right through the center of my antenna. Foruntately the space was big enough that the antenna wasn't harmed.

That lane through the fields would have been a great place to run a BOG antenna! 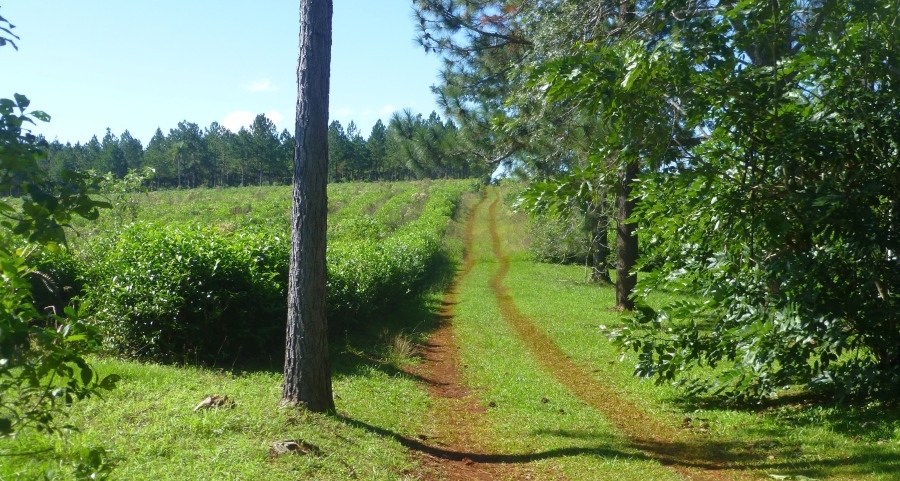 On the second day I tied a tall bamboo pole to a small tree and used it as the center support for a delta loop. This was oriented at about 150/330 degrees or roughly towards Montevideo to the south and Brazil's Mato Grosso state to the north. 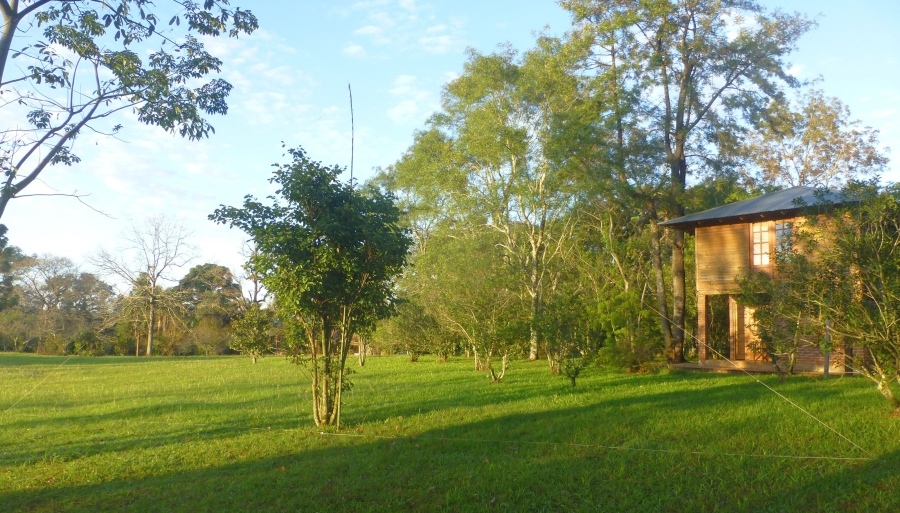 Another view of the delta loop with the tea fields in the background. The yerba mate was in fields further out.

The room had six beds. I set up the DX shack at the far side and slept on the near side. 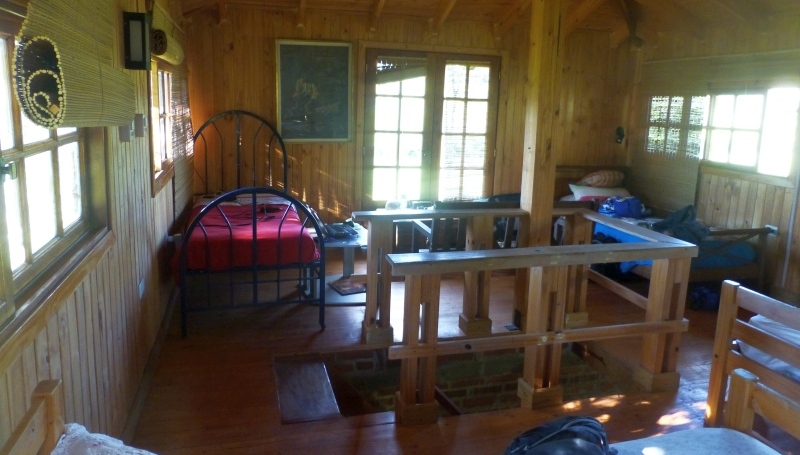 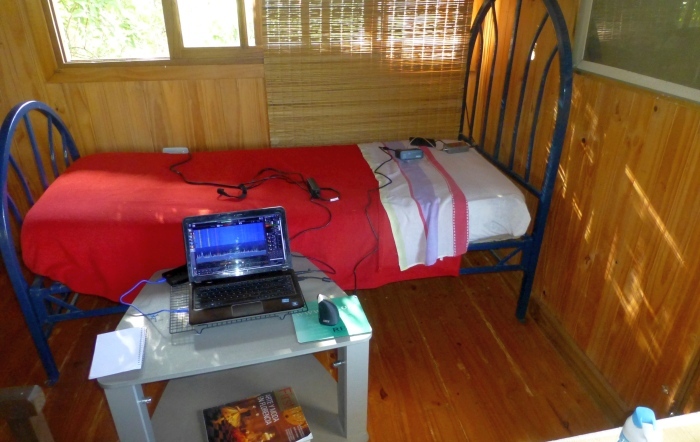 This old radio was on a table in the downstairs. Another sign it was a good place to DX from! (But I didn't try plugging it in.) 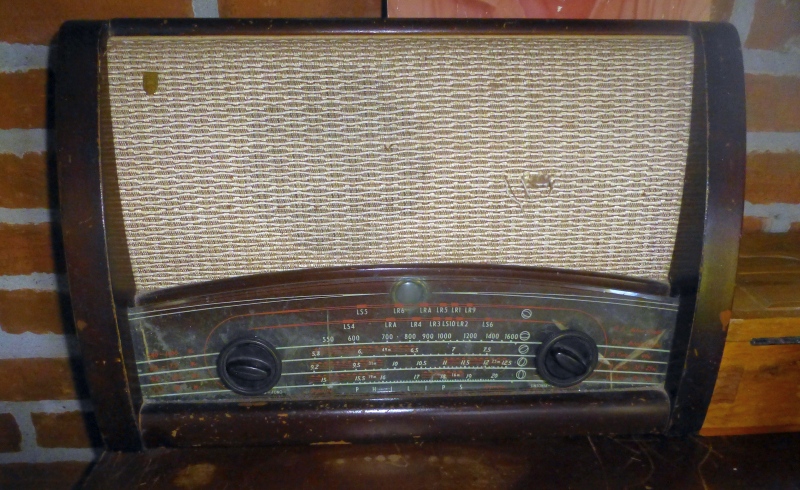