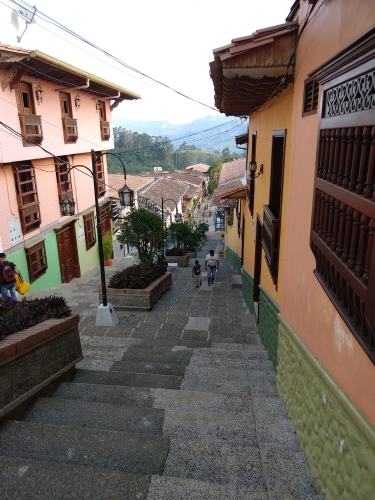 DXers John Fisher of Ontario and Karl Forth of Chicago plus Karl's wife Wannee, my girlfriend Carmenza, and I spent the first week of February, 2019 visiting the city of Medellín, Colombia. Medellín is an amazing city to visit but the region is also known for its many picturesque towns in the mountainous coffee region south of the city. Carmenza had to leave at the end of the first week so after she left the rest of us journeyed south to the Jericó, about fifty air-kilometers (and three hours ride) southeast of the city. Jericó is a beautiful, friendly, and surprisingly cultured little town. It has an art museum larger than many Latin American cities ten-times its population. A wonderful documentary movie about the daily lives of some the town's women was made several years ago. I highly recommend a visit if you travel to Colombia. To learn more about the town see this article and this article 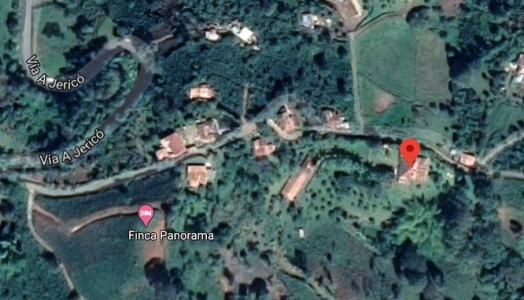 There would have been lots of advantages to staying in Jericó itself, but we also wanted to DX during our visit so we chose to the Finca Panorama in the nearby countryside. The house is at the coordinates (5.804835, -75.770660), about 200 meters east of where Google Maps shows it to be. The house was located at the top of the ridge line where the Cordillera Occidental sharply rises up from the Cauca River valley, as seen in this 3D Google view. I suspect the topography of the site had some effect on what we heard.

For equipment I had my Elad FDM-2 SDR receiver, my Wellbrook ALA-100LN, and various lengths of wire. John had his Perseus and Karl an ultralight receiver. For more details on my travel DX set-up, see the article I wrote about it for SWL Blog. The antenna was a wire loop - either a triangle or quadrangle with the ALA-100LN unit. The antenna was reoriented to a different direction every night and that sometimes involved adding or subtracting wire and changing the shape of the antenna, depending on available space and supports. We were constrained by an unknown noise source by the road and a steep drop-off beside the house, but managed to get four nights of good quiet DX by careful antenna experimentation. 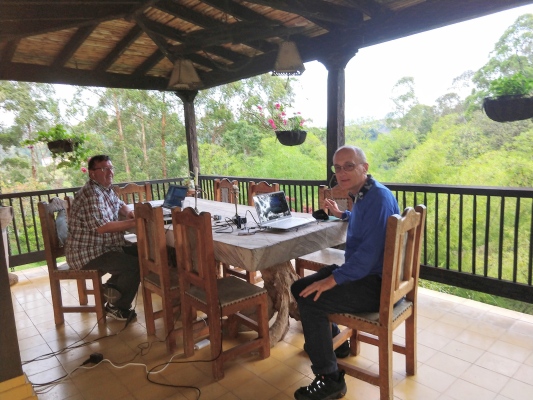 John and I set up our listening posts on the veranda during the evening. At bedtime we moved the laptops inside and ran the antenna lead-in through the kitchen window so we could make top-of-hour overnight recordings. As you can see in the picture, it was truly DXing in paradise. However, the mountain air is cold at night and it wouldn't have been comfortable DXing outside all night long. Well, maybe for John but not for me!

So what was reception like? Because Jericó is in a somewhat remote mountain regions and geographically further away from Colombia's larger cities (excluding Medellín), I expected there would be less interference from Colombian stations and better reception from further south in the Andes and from Central America than experienced in the Eje Cafetero region. Despite putting a lot of time into DXing the SDR files, I've only managed to log 347 stations in 17 countries so far. I'd be very surprised if I could get to 400 stations heard on the four nights of recordings. The Colombian stations just dominate too many frequencies. Maybe it was just what conditions were like that week, but I think that our location on the eastern ridge of the Cordillera Occidental gave a clear path to the many stations further east in Colombia, to the detriment of stations located south and west. For example, I've only found 15 Ecuadorians compared in the Jericó to 57 heard outside Armenia, Colombia in 2016 on a smaller set of SDR files using a non-directional antenna. Even the high-powered stations from Guayaquil are much weaker than in the Eje or even in more distant Boquete, Panama. 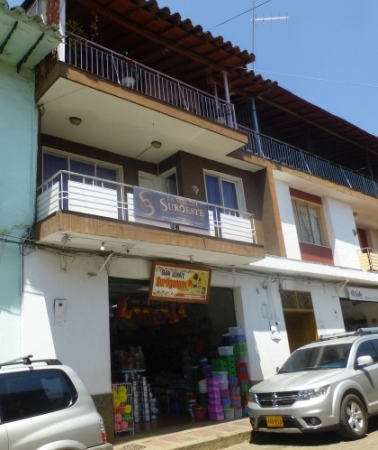 But there were some bright spots DX-wise. A number of low-powered Colombian stations, mostly from the surrounding region, were logged. And we had amazing reception into the United States on a couple of the evenings. It may have been conditions or it may have been our location. It wasn't the antennas as Karl was easily hearing stations such as WBBM 780 and WLW 700 on his barefoot ultralight. My loggings include WHAS 840 plus Wyoming, Oklahoma, and Des Moines, Iowa on the X-Band.

We were fortunate not to have strong local stations. The closest station on the air was Radio Santa Bárbara on 1310 kHz in the town of the same name about 30 kilometers across the valley. Jericó does have a local MW station - La Voz del Suroeste on 1520 kHz - but lucky for us (although not for the station), a mudslide had taken out their antenna a few weeks before so they were off the air during our visit. We learned why they were off the air when we stopped by the station to ask.

I heard many of the stations Don and John heard on their SDRs with a Sangean DT-200X pocket radio. At home, one of the things I’ve found is that the ultralight radio can receive many of the signals heard on larger radios, but doesn’t perform as well on frequencies that are adjacent to powerful locals. There are no powerful locals close to Jericó.

Tuning around, it did feel that we were in a triangle between Medellin, Bogota and Cali because there were strong signals from all three places, but we were in fact much closer to Medellin. I didn’t hear many stations outside of Colombia in South America; a few from Ecuador, only one or two from Venezuela. But I was surprised to hear a number of U.S. stations. It’s much easier to identify a home country station even with only a few words. I heard WIOD, WCBS, WFAN, WLW, WGN, KWKH, WFED, and a few x-band stations and others.

So far 347 stations in 17 countries have been logged with just under two-thirds of the stations being Colombian.

I have no immediate plans to return to Jericó, but I do hope to do so someday. The town is beautiful and I'd like to explore more of the surrounding area. I would stay in town if I didn't have plans to DX. As much as I enjoyed the Finca Panorama, if I planned to DX I would look for another place closer to town and not on the ridge line in hopes that DXing would be better or at least different. 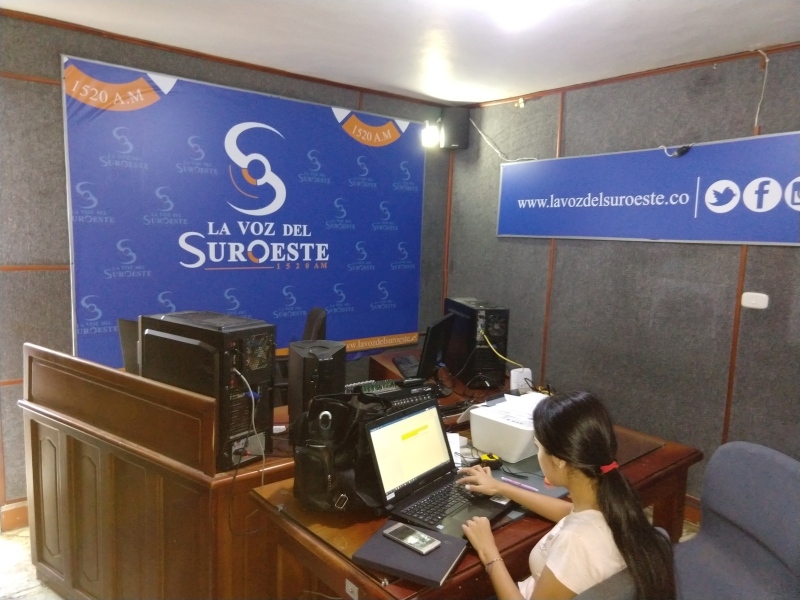 DXing after dark on the veranda. I'm dressed for the cold but it doesn't seem to bother the hardy Canadian. (Photo Karl Forth) 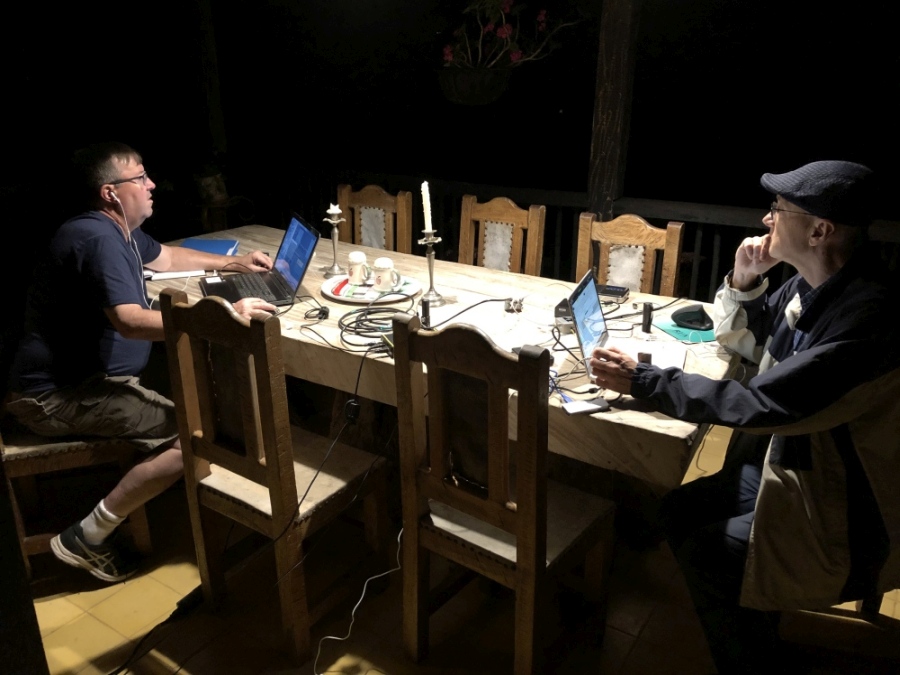 The Cauca Valley to the east of the house. (Photo Karl Forth) 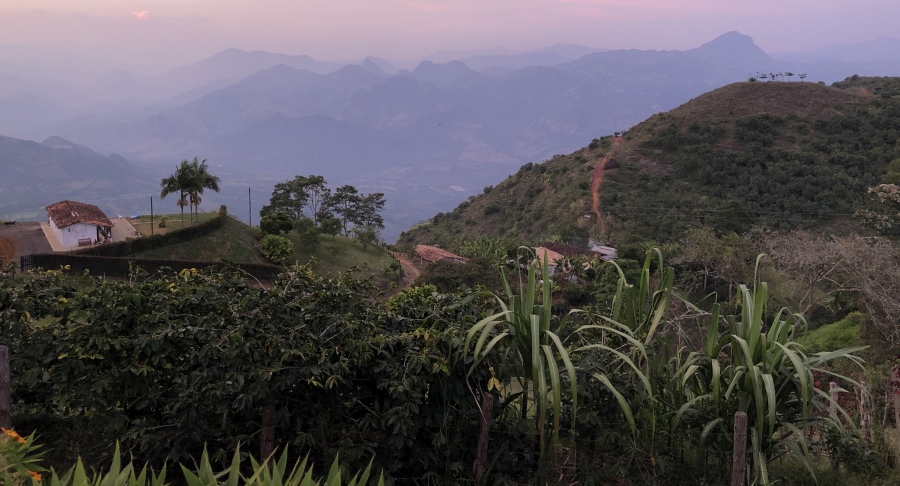 The veranda ran on all four sides of the house 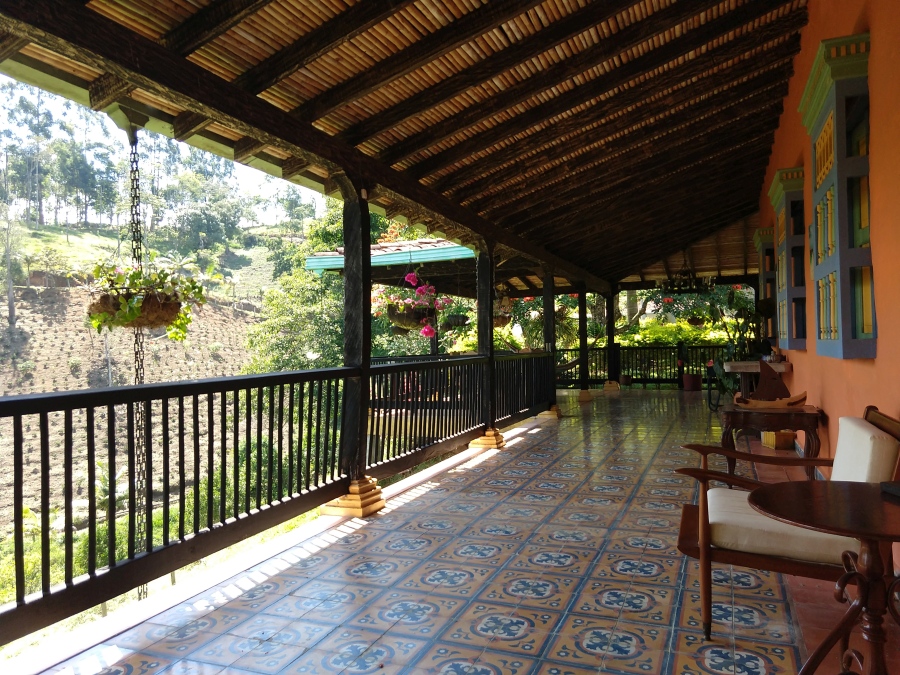 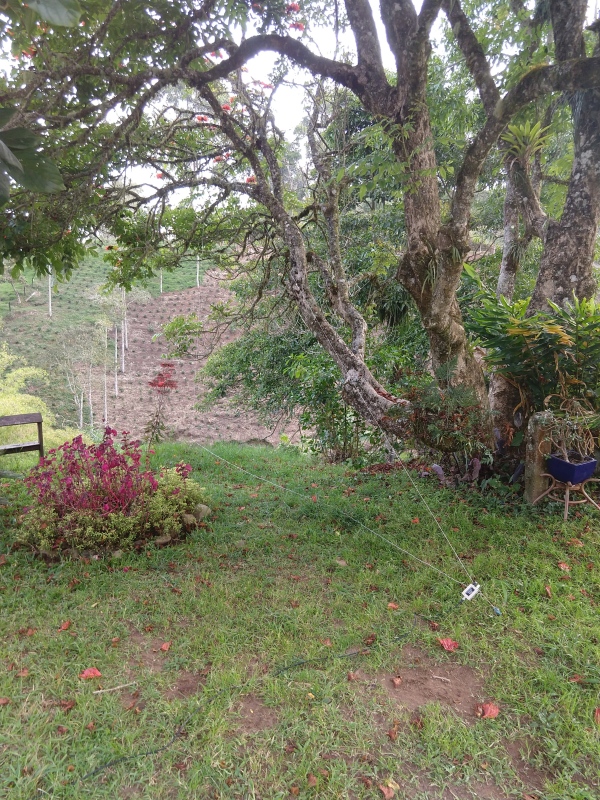