DXing in the Eje Cafetero

* The 2016 Eje Logs Webpage I made of my logs in 2016 with numerous MP3 recordings.
* Loggings Made With 2020 Files (so far) in a Google spreadsheet.
*John Fisher's 2020 Logs in a Google spreadsheet.
* Around 40 MP3 audio files made from the 2020 SDR recordings.
* NDB Logs - Non-directional beacon logs compiled by Andy Robbins and Brett Saylor from the SDR files.
* SDR Recordings from the Eje Cafetero - Currently all my 2018 and 2020 SDR recordings are available for download from my Google Drive.


The Eje Cafetero, or Coffee Zone, is the name given to the three small Colombian departments of Quindio, Risralda, and Caldas in the center of country. As the name implies, this is Colombia's most important coffee-growing region. The core of the Eje Cafetero is the region around the three departmental capitals of Armenia, Pereira, and Manizales. It's a beautiful region and easy to visit. In fact, the Eje is a popular family vacation destination for middle class Colombians from the big cities. I've visited the region three times, in January/February of 2016, March of 2018, and most recently in January of 2020. In those visits I've made DX quality SDR recordings five times from four locations and non-DX quality recordings at two additional locations. I'll list them in reverse order. 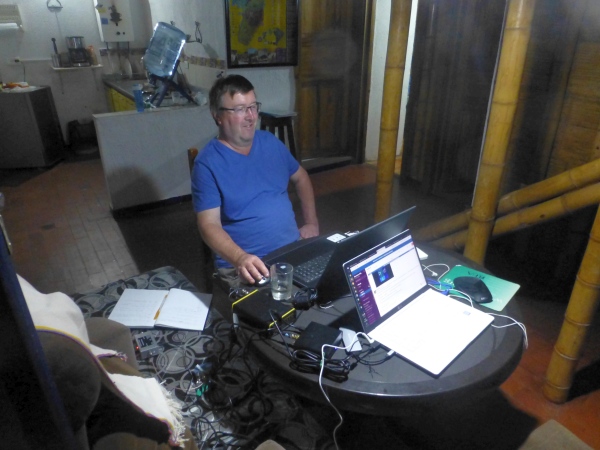 DXer John Fisher of Ontario and I spent four days/nights outside of Armenia on our way from Popayán to Medellín. We stayed at an AirBnB house rental along the highway about five kilometers south of the small city of Calarcá and just outside Armenia. The exact coordinates are (4.499025, -75.676193) and it's called the Casa Linda on Google Maps. As usual the antenna was a wire loop in some form of triangle or quadrangle connected to a Wellbrook ALA-100LN unit and the antenna was changed each day in hopes of getting a somewhat different directional pattern. Erecting the loops was somewhat problematic as the only supports we had were thickets of tall bamboo along the edges of the property. It took some effort to get the wire securely placed, but we managed and had some kind of loop up all four nights. The location was adequate but I don't think I would DX from there again. For our next stop we spent two nights at an apartment in downtonw Manizales. I threw a wire out the window and made two top-of-the-hour SDR recordings but all that was heard were the local stations.

In 2017-18, I spent about three weeks in central Colombia as part of an overland journey that took me from Peru through Ecuador to Colombia and back again. I made SDR recordings at three different locations in the Eje Cafetero but I haven't seriously DXed any of those yet, so no loggings or audio recordings. The first location was at an AirBnb on the northern fringes of the city of Armenia. It didn't turn out to be as good of a location as I had hoped, so the recordings are not DX quality.

After spending several days in downtown Pereira (no DXing) I went on to Manizales and spent three nights on the northwestern outskirts of the city at what was then called the Maurio Hilton Hostel but is now the Eco Hotel Villa Sarita, located at (5.090557, -75.551965). (They appear to have fixed up the place a lot since my stay.) As the hotel is built on a steep hillside, erecting the Wellbrook wire loops was different, although not difficult. Reception appeared to be excellant and I made all-night recording all three nights.

The final DX location was five nights at the Finca El Meson hotel outside Armenia, where I had previously stayed in 2016. This time I DXed with the Wellbrook wire loops on the rear veranda.

I haven't yet done any serious DXing on the 2018 files. 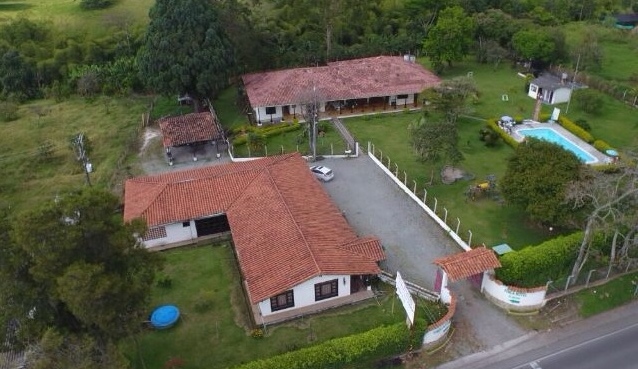 At the beginning of 2016 my girlfriend and I spent two months traveling through Colombia from Pasto in the south to Medellín and then on to Bogotá. In late January we spent four nights at the Finca Hotel El Meson (4.530015, -75.723761), just off the highway on the west side of the city of Armenia. It was in expensive and well-located place for our visit and because we had other activities my DXing time was limited. Nevertheless, on two nights I took my equipment to the back veranda, hung my PA0RDT mini-whip over a clothesline, and made some SDR recordings. Overnight recording wasn't possible because the rooms had thickly screened windows that opened onto the verandas so that running a coax lead-in to the room wasn't practical.

From Armenia we went north to the little touristic town of Salento where we stayed just outside of town at the Condomino El Recreo (4.636223, -75.574951). Carmenza's great-uncle arranged for us to stay at this private members-only facility. I tried putting the PA0RDT in a tree next to our condo but reception was a bit noisy. Instead on two evenings I carried my equipment down to a little gazebo overlooking the canyon where it was very quiet. Despite the noise I did set up the PA0RDT in the tree on two nights to make timed overnight top-of-the-hour recordings. Unfortunately, Windows updated one night so I only got one night of recordings.

The Eje Cafetero and adjoining Antioquia department is my favorite part of Colombia and I hope to return many times. And when I do I'm sure I'll find a place to DX from for a few days. The El Meson and the Mauro would both be worth returning to, as would the condos if I could get in. But I think the next time I go I'll try out a new location.

The 2020 DX House in Calarcá. The side wire of the square loop antenna is visible. 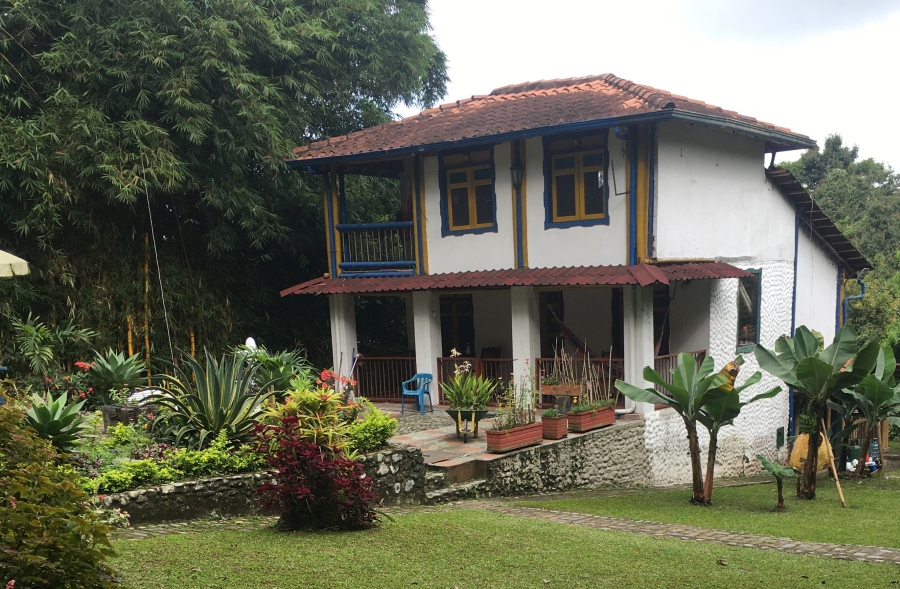 Tossing the antenna wire up into the bamboo. 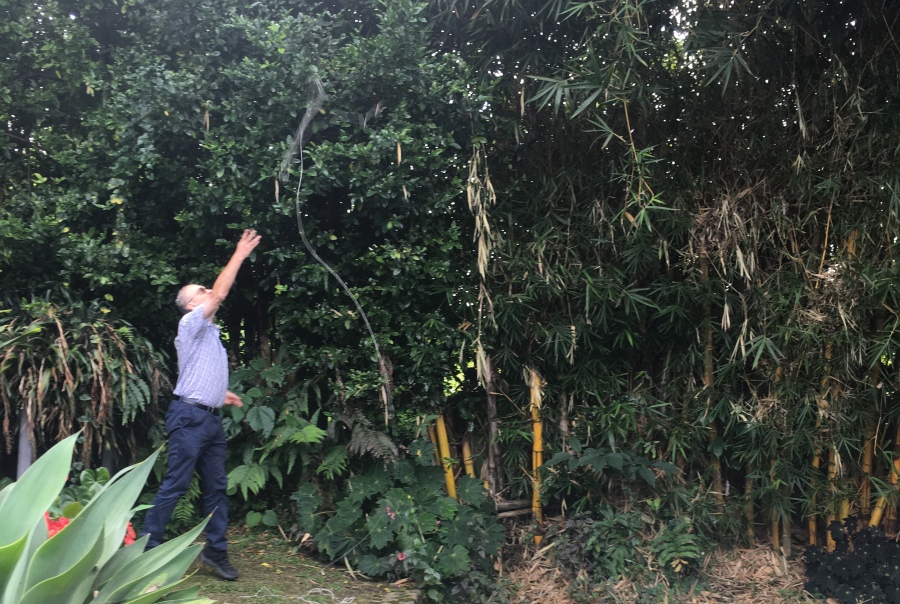 The frustration of tangled wire. 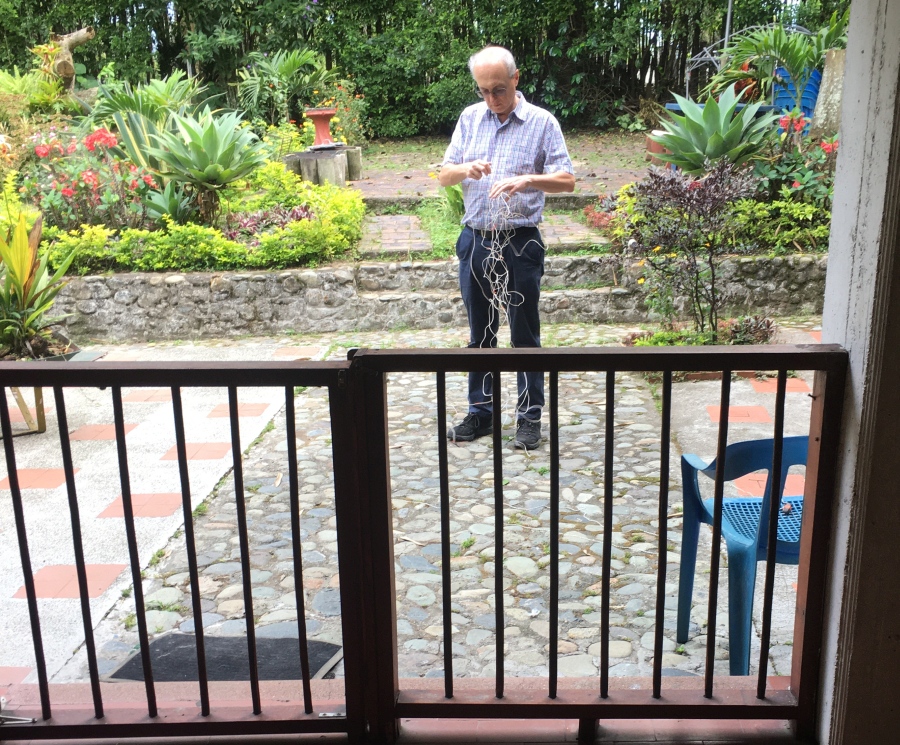 Two mornings in Calarcá John and I walked up the road to the La Carreta restaurant for an authentic cafetero breakfast. 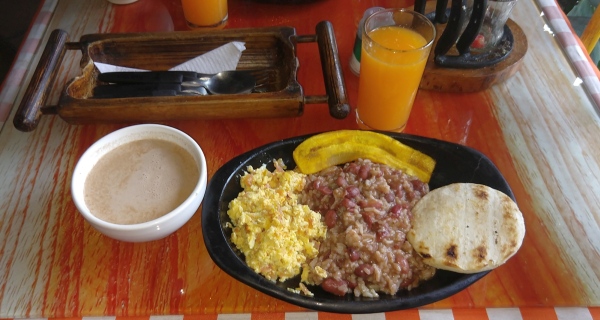 My room at the Mauro Hilton in 2018 was in the back. I used three different loop configurations on the steep hillside. 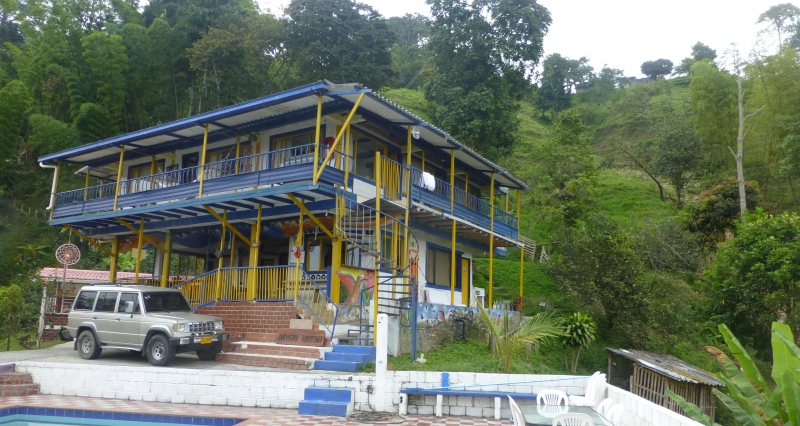 This antenna at the Mauro might best be described as a tilted delta. 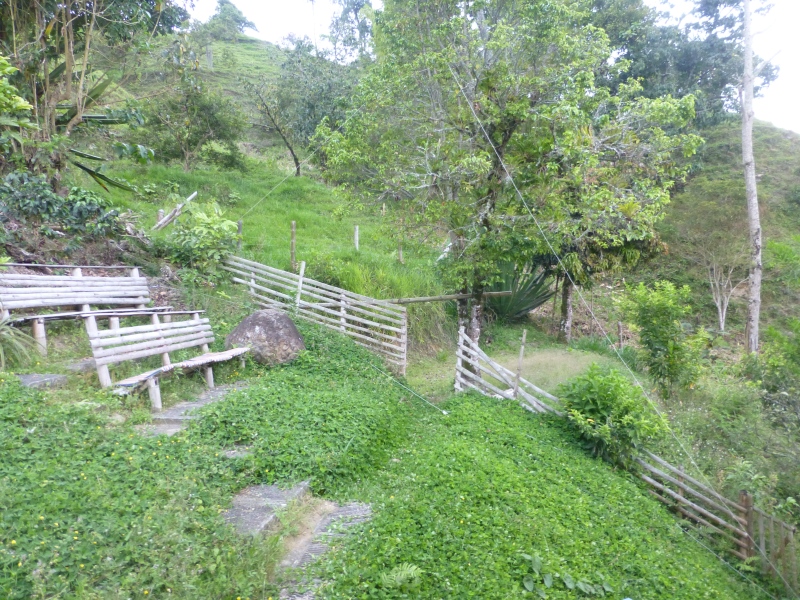 One evening I spent a few hours DXing with the PA0RDT from the gazebo in front at the Mauro. The views were gorgeous. 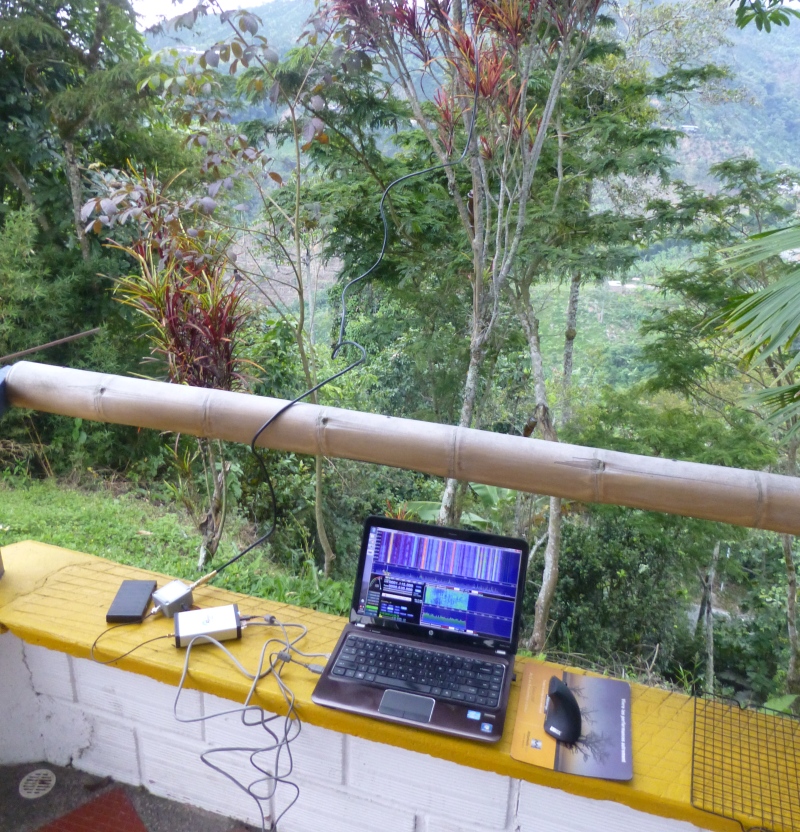 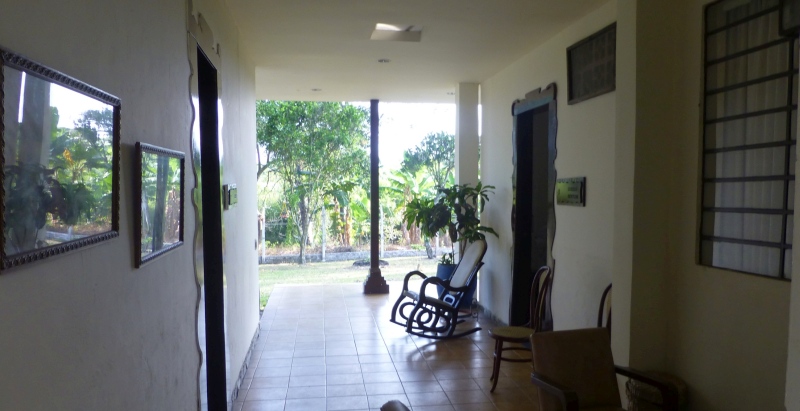 The DX Gazebo in Salento

DX Setup in the Gazebo