* Boquete Logs - Spreadsheet of logs made from the Boquete recordings. These will be updated as more DXing is done.
* Boquete Audio Files- Over 300 MP3 recordings of medium wave stations made from Boquete receptions.
* Boquete SDR Recordings - All of my Boquete SDR recordings can be downloaded from my Google Drive. They will remain there until at least late 2021. If you find something that hasn't been logged yet, let me know so I can add it to the log and give you credit for it.
* The gritos of Azuero - About a unique feature of Panamanian culture that can help identify radio stations. 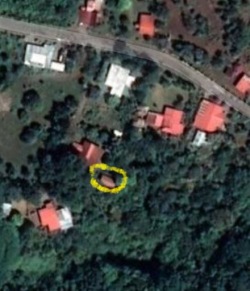 In late October 2019 I visited Panama for the first time. The reason for the trip was both to visit and new country and to see my daughter who was working in the Peace Corps west of Chitré in central Panama. Of course, I also wanted to find a place where I could DX for several days and after some research settled on Boquete, a small town in western Panama, about fifty air-kilometers east of the Costa Rican border. The town is a center for foreign backpackers and eco-tourism. There is also a substantial community of mostly retired American expatriates in the area. The expatriates seem to mostly keep to themselves in expensive gated communities in the surrounding mountains. Most of the condos and houses listed at the real estate office were priced between $500,000 to $1,000,000 - amazing prices for a remote location in Panama. Boquete is a totally different feel from Cuenca, Ecuador, where the expats generally live in modest apartments and are actively involved in the local community. 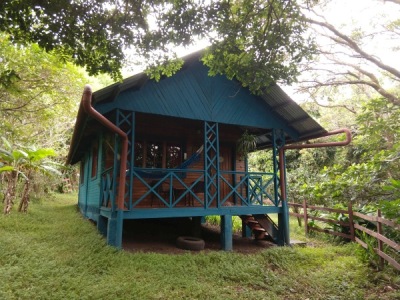 From a DXing standpoint, Boquete had several advantages. First, the closest medium wave stations are about 40 kilometers to the south in David and are relatively low powered. Second, as Boquete is in western-most Panama, it is at least 800 kilometers from every city in Colombia. Colombia's has stations of 10 kW or more on almost every MW frequency and I knew that they dominate the band in the entire region. Finally, because Boquete is a tourism center there is a wide variety of lodging available. The town itself is located at the bottom of a narrow valley, but on AirBnB I found a small cottage on a ridge line south of town. The exact location can be found by plugging the coordinates (8.758599, -82.436163) into Google Maps. I've circled it on the satellite view clipping above. I spent five nights there, arriving the afternoon of Monday, November 11 and leaving the morning of Saturday November 16, 2019.

For equipment I had my Elad FDM-2 SDR receiver, my Wellbrook ALA-100LN, and various lengths of wire. There was a wooded ravine on the other side of the fence, so antenna space was limited to the narrow grassy areas around the house. But large wire loops don't take up much space and there were plenty of tree branches for supports. Each night I changed the shape and direction of the loop so that it never pointed in the same exact direction twice. The first night I used a balanced delta but other nights it was a variety of unbalanced triangles or quadrangles depending on what I could do with the tree supports and space. I added or subtracted wire as needed. The goal was to have some variation in the receive pattern every night. For more details on my travel DX set-up, see the article I wrote about it for SWL Blog. 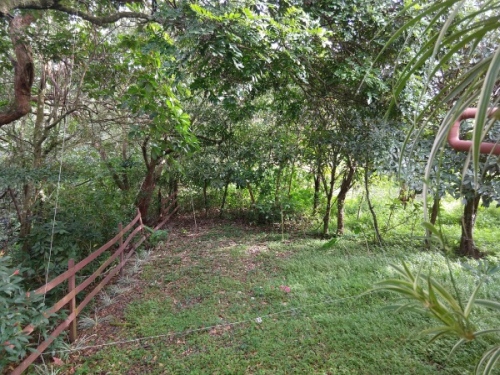 I had hoped that Boquete was far enough west that Colombian stations wouldn't totally dominate the medium wave band. In that I was somewhat successful but not as much as I would have liked. Colombia is a big country and Boquete is too close to get a good null on the entire country. Nevertheless, my use of a different antenna configuration and direction each night was a success in that each night showed some distinct directional characteristics. Nights two and four were especially good, providing the best null of Colombia.

Obviously, I heard a lot of Colombians from all over the country. And generally stations from all over Panama came in well, especially in the early morning. The other area that came in exceptionally well was Ecuador, especially the coastal city of Guayaquil. Ecuador has a lot of mid- and high- powered stations and they benefited from a mostly all-water path. Some of my better catches were low-powered stations in Peru, further south on the same beam. I hope to eventually find a Chilean station. 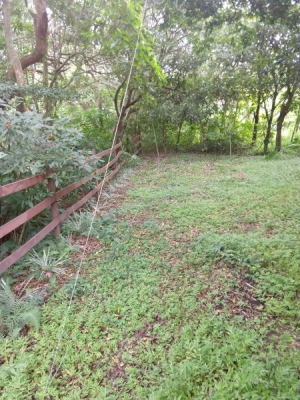 I didn't hear as many stations from the rest of Central America as I had hoped. Part of the reason for that is that Central American stations are mostly low-powered and so get clobbered by the Colombians, but I also suspect many still-listed Central American stations are actually inactive. I also heard fewer US stations than expected (excluding the X-Band). There were several frequencies (most of which I didn't log) where I heard English talk or the musical interludes of US news networks but the stations were too far under the dominant Colombians to pull out an ID. There were a lot of Cubans but those were mostly outlets of Radio Rebelde, Radio Progreso, and Radio Reloj Nacional and not so many of the smaller regional Cuban stations. But I did hear a few of those plus a couple of good catches from Puerto Rico.

A big suprise was the TransAtlantic reception. I knew such reception was possible as I had heard about a dozen trans-Atlantic countries when I lived in Honduras for three years in the early 1980s. But I didn't expect to get an opening in the few days I was in Boquete. In addition to the five countries and sixteen stations that I logged I also had strong carriers with some audio on several frequencies. Still, the biggest surprise of all was finding audio on 1566 kHz one morning around 1000 UTC. This had to be the FEBC station in South Korea. Unfortunately, I didn't have so much as a carrier on any other trans-Pacific frequency that morning.

So far 449 stations and 26 countries have been logged on these SDR recordings. I've only gone through about ten percent of them, but it's a carefully selected sampling. I've also had some help from Fredrik Douren in Sweden. I think it's reasonably possible to find 500 stations but I doubt there would be many more than that. The Colombians are just too dominant on too many frequencies. I'll return to DXing these off and on. I invite other to download some of the SDR recordings and see what they can find. If you find something not already logged I'll be sure to give you full credit.

I have no plans to return to Boquete but if I did I would definitely do some more DXing. A real trans-Atlantic opening could add another ten countries easily. And, as much as I like time-delayed DXing of SDR files, I know that I could add some additional stations via real-time DXing with a tuned ferrite loop.


The Gritos of Azuero

A little over 100 kilometers west of Panama City is a squarish peninsula that sticks out into the Pacific. That is the Azuero Peninsula, considered to be the center of traditional Panamanian culture. Las Tablas and Chitré are the two main towns on the peninsula. As my daughter was working just west of Chitré, I spent time in the Azuero both before and after my trip to Boquete and again when I returned to Panama in February 2020 prior to returning to the USA. (Little did I know my daughter would be following me three weeks later thanks to Covid-19.) In that time I got to know an interesting feature of the Azuero's unique culture that DXers can hear on the radio and maybe even use to identify stations. It's called the grito.

In most places the Spanish word grito translates as 'scream' or 'shout' but in the Azuero a grito is a sort of shouted greeting used by men (never women) in rural areas. It can be used to draw the attention of someone at a distance but more often the grito is connected to male bonding and masculinity (if you'll excuse my amateur anthropology). While I was in my daughter's little village of 200 inhabitants, and in other rural areas of the Azuero, it was very common throughout the day to hear a man let out a grito somewhere nearby. To see this in action, take a look about one minute in on this video of my daughter showing where she lived. After we finished the video I went and joined the men for about half-an-hour as we passed around a bottle of seco, the local firewater. (I impressed them by taking three strong swigs.) As we talked and drank, every few minutes one of the men would lift his head and let out a grito. As far as I know, the gritos weren't aimed at anyone in particular.

So, what is the connection to radio and DXing? Radio stations try to reflect the culture of their audience and, as I learned from my listening, the grito is an important component of programming on Azuero radio stations that want to reach a rural peasant audience. In subsequent DXing of SDR files made in Boquete and in nearby Colombia there have been numerous times when I've heard gritos and immediately thought 'That's an Azuero station.' And every time I've been right. I've never heard anything like it anywhere else in my Latin American travels. To demonstrate how it's used on the radio, I've put together this list of examples. The first four were recorded in my daughter's village in February and the last one in Boquete.

* In this example recorded on Radio Provincias 630 kHz, the singer begins a song with an elongated grito.

* On this recording of Radio Mia 920 kHz, gritos are in the background of the station ID.

* There are several gritos in the background in these announcements on Radio Amistad, 750 kHz, from the small town of Los Pozos.

* Finally, if you listen closely to this recording of Radio Mensabé on 1410 kHz that I made in Boquete, you can hear the gritos in the background of the station song that's played off-and-on throughout the clip.


As always, some knowledge of the local culture can be one of the most important tools that a DXer has.